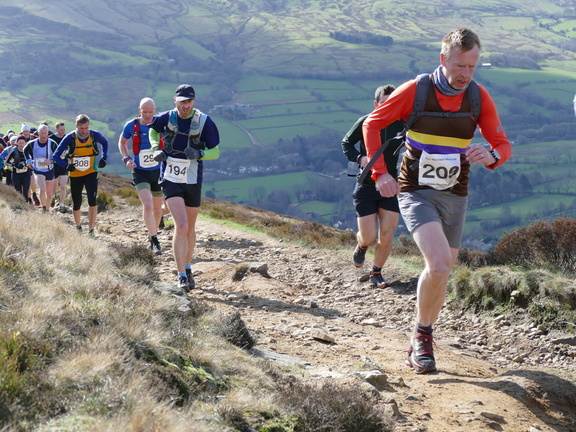 This is one ultra distance type event that seems to attract Dark Peak. As well as being a much more sensible distance than some others it is well organised as I found when I took part for the first time. The conditions were perfect and you couldn't possibly get lost because of the red arrows (painted, not airborne!). The checkpoints are excellent though perhaps there are too many.

This is an event where you declare your team name on the day and so in a hasty consultation with Nigel Robinson and Bob Hamilton at registration I suggested calling ourselves 'Dark Peak Lutra Lutra XL. Bob then added the suffix 'Invaders' as if Lutra Lutra wasn't pretentious enough. The King of the 100km, Martin Daykin, was invited to join our team along with Dave Gower-Rudman who was last seen in the Peak District suffering nightmares on the Derwent Watershed. Martin finished third. I had expected him to win but nobody could have predicted Dave Neill's incredible performance in getting the record down to 5:10:40. Dave, Bob and I came in within a minute of each other and Nigel followed in the top 30. Seven other Dark Peakers appeared in the results so we were quite well represented but not as well as Glossopdale and Macclesfield Harriers. It was not until I had finished that I realised the distinction that Dark Peak had already given the Otter 40 having gained the team prize for the first two years of the event. I then wondered if a team result containing only one bona-fida club member might be entirely acceptable. So, for the moment the matter is open to debate. Do we get Dark Peak inscribed on the shield or 'Dark Peak Lutra Lutra XL Invaders'? A club achievement or not, the team record was broken by 40 minutes.

The competitive aspect apart, the race is extremely enjoyable in its own right and people should not be put off by the distance. After all, it doesn't have to be taken too seriously. I was going to treat it as a gentle training run but I got carried away!