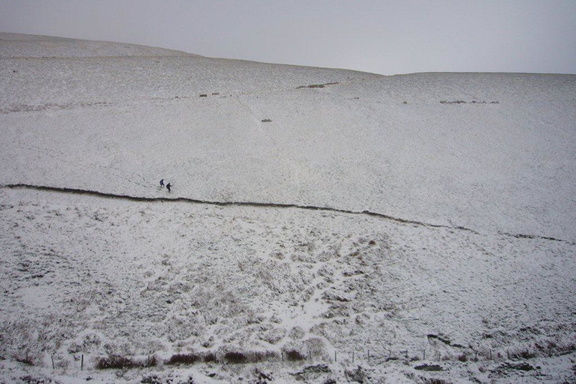 Seb Coe and Steve Ovett eat your hearts out! A scandal to shock the fell running world broke at Dungworth. It involved non­ payments, disqualifications, route variations, disappearing officials together with enticements which vanished at the first hint of trouble.

Let us tackle the thorny problem of payments first (we must grasp the nettle and nip it in the bud before thyme runs out). The start list included two people, one being Tim Tett, who had not paid their entrance fees. Was this an inducement for Tim to turn out or did he not have enough money? Should the AAA be informed? Is disqualification a sufficiently harsh penalty? The race director and officials obviously thought not. Alan Yates, Alan Sanderson (direct from marshalling Sanderson's bottom), timekeepers Joe Berry, Hamish and Nick Hamilton, fell running groupies Fi Berry, Trudi Hamilton, Christine Tett and roving marshals Jackie Smith, Mick Eaton and Bob Seagrove collectively made the decision (which could rock the fell running community) not to disqualify. At times the spectator (Malcolm Patterson) fresh from his World Cup preparations (bloodletting and appendectomy at the Hallamshire [Harriers or hospital?]) was caught up in the machinations of this intrigue. The decision, however, stood and Tim Tett lifted the trophy again after racing round in 30 minutes 13 seconds on a lengthened course. After the race, in an exclusive interview, Tim Tett (almost in tears) admitted disappointment that the apres race enticements of hot Bovril, chicken legs and meat pies had disappeared and he was reduced to a hot shower. But this was not the whole story behind his emotion. Tim was believed to have had a disturbing semi-religious experience during the race. Looking back to see the next runner, he saw the high bracken in the Limpopo Valley section parting mysteriously like the Red Sea. Closer inspection revealed the second man. Little Bob Toogood, fighting his way through or under the bracken.

Behind Bob and The Parting, drama and incompetence had broken out when, despite clear markings, Jonathon Cant and Graham Berry missed the famous right turn having survived Jones' (the absent) Corner. This diversion caused Graham, allegedly, to shout "Dung" (or a word to that effect) on discovering the mistake. The duo were now nicely placed in about 10th place. Nevertheless, Jonathan's continuous monologue, punctuated by Graham's gasps, is thought to have disheartened Matt Simms, Chris Stamp, Alan Yates, Don Longley and finally John Firth who all, generously, allowed them to pass and regain their former positions.

Meanwhile, first lady, first local lady, first local lady organiser and first lady veteran, first lady local veteran and first lady local veteran organiser, Chez de Mengel beat one of the two invited international runners, Pete Griffies of Glossop and Cockermouth. However, she failed to catch the other international who, as ever, was immaculately turned out. This of course was Will McLewin fresh from altitude resting in Yugoslavia. Mick Poulter had the pleasure of splitting the two internationals but Pete Dyke, full time fell runner, is believed to have led Will around. To add to the developing scandal, some runners had the temerity to miss the main event of the afternoon. The rounders match passed off eventfully with changing rules , walkouts, moving bases, googly bowling and bat throwing. Fortunately all was resolved with all afternoon opening to tine Royal. Next year will be different and there will be the usual prizes.

Considering the controversy surrounding one of Dark Peak's premier events, the race director now gives the official view... DUNGWORTH : The director's report Tim, out in front all the way, did very well to come close to the magic 30 minutes, thus retaining for another year the Granville Harper trophy. At one point in the race it looked as if Chris Stamp was going to succeed in his bid to work all the way through the field after handicapping himself with a late start. Graham Berry, veteran of previous Dungworths, kept up the race's reputation for navigational errors. Or was his Damflask detour a deliberate tactic to break the spirit of new boy Jonathan Cant ? Bob and Chez, Dungworthies of 3 days standing, swept the board as first vet, first lady, first local etc. An international flavour was supplied by the welcome appearance of McLewin and Griffies: the only two people from West of Ughill ever to find Dungworth. Both are threatening serious comebacks. Noteworthy runs were also had by John Firth, Don Longley, Alan Yates (2nd local (?!)), Matt Simms, Pete Dyke, Mick Poulter etc. J. Manthorpe was disqualified for hooliganism.

Thanks are due to the army of helpers, including the Hamilton-Berry timekeeping and computerised results service; Malcolm P and Jackie Smith (Dungworth Main St and Jones' Corner); Alan Sanderson (Sanderson's Bottom); Mrs Berry (spectator); the new landlord of the Royal (who stayed open until after the rounders match); Fortnum and Mason (hot pies); the inhabitants of Dungworth who thronged the course and heightened the already electric atmosphere with the pounding rhythmns of local calypsos. Dungworth Gala will be held again next year. There is some discussion about whether to hold the race again as part of the Gala proceedings, or whether to hold it (possibly a different course to accommodate a bigger field) on a different day, making use of the excellent facilities. Or we could have two races, the usual Gala race and a new independent one. Any suggestions ?