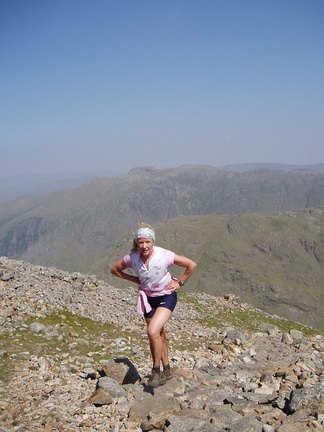 Not the National X-Country Champs on Saturday 25th February 1989

Driving home on Friday night in blizzard conditions I was beginning to wonder whether the race would take place. However, a quick phone call to Andy Harmer first thing on Saturday morning revealed that the roads were clear in Sheffield, so preparations for the second Dark Peak Cross Country Championships began.

Putting out markers in the bright spring sunshine, with the remains of melting snow underfoot, reminded me how steep the hills in Rivelin are. The thick mud on several parts of the course and the swift flowing water at the water splash augured well for the morning's sport.

By 11:25am fifteen club members had assembled, twice as many as last year despite the weather. Tim Tett charged straight into the lead and pulled steadily away to a convincing victory. Behind him, Phil Murray, Andy Harmer and Tony Farnell swapped positions several times until Phil showed a fine turn of speed over the last half mile from the top of Den Bank to kill off the old men.

The real drama of the race was unfolding further down the field. Chris Worsell, making a comeback, gave a powerful demonstration of his classic 'worselling' technique. The victim, Jeff Harrison, who should have known better, ended up running down Manchester Road! Newer members who have not yet been worselled may have to be on their guard this summer if Chris's comeback extends to club runs.