DPFR Juniors
@DpfrJ
A favourite destination of many a Dark Peaker and the junior races through the village have been the scenes of nume…
1d • 21/10/2020 • 9:13

Dark Peak Fell Runners
@dpfellrunners
RT @cbdgb1: A wee wander up Scafell Pike today with a spade and brush for @fixthefells and @NTScafellpike wondering why no litter. Bumped i…
4d • 18/10/2020 • 19:20

Dark Peak Fell Runners
@dpfellrunners
RT @TimBirchWild: Vigo our incredible #BeardedVulture has finally left our shores. The French Alps where she was born is calling her home.…
6d • 16/10/2020 • 13:57 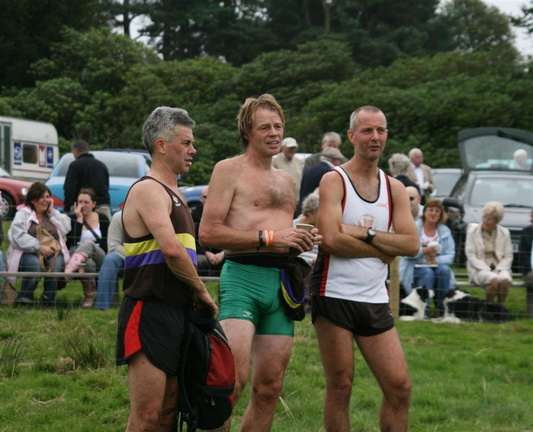 The pre-race arrangements all went very smoothly and reflected the fact that this event is now in its 28th year. The sleep on the school gym floor, the full English 'heart attack' at 5am and the coach transport to the start at Ingleton, all had a balance of friendly atmosphere and efficient organisation. The Keighley scouts organise this event and like para-military groups everywhere they are very fond of rigid regulations. So it was that the cag which had seen me round the Derwent Watershed one winter's night was deemed insufficiently waterproof for May weather in the Dales. Scrutiny of the soles of our footwear prompted queries as to whether a depth gauge would be used on the tread next year?

I knew that several Dark Peak stalwarts such as Colin and Jeff were not taking part this time but across the 367 people on the start field the sartorial idiosyncracies of one competitor did seem familiar. At that moment there was a laid back announcement: "You might as well get going then!" As in many long events there was a bizarre sprint at the start and I didn't see Mike Hayes again during the next 61 miles.

On Ingleborough and Whernside the weather pattern was set. Clear sun with a sharp wind after a long dry spell made for good conditions. The forecast afternoon showers did not materialise and late in the day even the dreaded Fleet Moss, about which people talk in hushed tones, was merely a brief moist interlude.

Long before dusk at Cray, I was grouped with three people I'd been running with for the previous fifteen miles plus several others who were keen to join us, a total of eight. Two of them, it turned out were to attempt the Bob Graham on the same day as the Dark Peak Roadshow, in the same direction at the same time. The rope on Broad Stand must have a magnetic attraction. Coincidences continued when I found out that one of them, a Quantock orienteer called Arthur Vince, went to school many moons ago in Bournemouth with Mike Hayes. Mike achieved a certain notoriety for being the only person in the school to cut his own hair. He obviously still has the same scissors and uses them on his running kit now.

But I digress. As we climbed Great Whernside the dusk thickened and clusters of lights could be seen coming off Buckden Pike. The combination of a clear night, easy going, entertaining conversation and a growing weariness was wonderful. The drawback of having to move at the speed of the group's slowest member was balanced by the familiarity with the route of others in the group. At about lam at Yarnbury we were 'degrouped' which allowed a fast two mile run to the finish at Threshfield. Sixty-one miles and eleven thousand feet and my legs had something left. I obviously hadn't tried hard enough.

The plastic chairs in the hot showers were a stroke of genius and at 2am fried breakfast before a few hours kip just set me up nicely for the Sunday morning drive back to Sheffield. It had been a brilliant event and a great, day out. I can't recommend it too highly. And if, like me, you're secretly ticking off Bridge's Tables of the 2000' mountains of England and Wales, this route takes you to over ten of them.