Dark Peak Fell Runners
@dpfellrunners
RT @peakdistrict: Restoration works have started on the iconic #GreatRidge on #MamTor. Please be aware the path at the top between Hollin…
26d • 24/03/2021 • 13:11 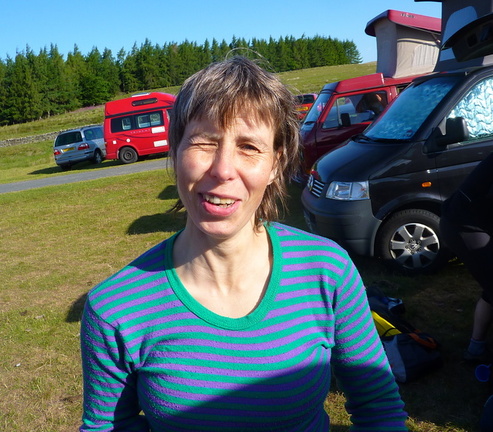 Malcolm Patterson broke the record by over 3 minutes; Clare the ladies by 5 minutes and Andy the Vets by 4 minutes; a reflection of the fastish times only impeded by the strong wind- Ed and Howard were first back and Graham last, with all runners in by 11.22am. The times of all were exact bar some of the 9am starters, those results courtesy of Tim Mackey's watch which seemed fair to me. The only complaint seemed to come from Alan Yates who was most disbelieving of the top echelon of the 9am starters. The Laisse-Faire timekeeping has often been a character of these races and the first man in did seem to find the results board under the back wheel of my car! Perhaps as all the runners are getting faster a 15 minute differential may be in order next year; although the 30 minute time lapse has proved helpful to ensure everyone was 'swept' off Margery as in 1986 when the conditions were pretty poor on Wilfred Edge. The race does involve trespass at the beginning otherwise the legitimate route involves nearly a mile of track alongside the Reservoir. As for the finish, one or two 'lost souls' tried to follow Malcolm and got 'forest bound' whilst others played safe and came down the track from Lockerbrook farm. In future all I would say is after coming down the last field and reaching the Lockerbrook track any route to the car park is permissable- Thanks everyone for coming and well don to Murdo on completing his first 'rough' race and Tim Mackey for what appeared an impressive run. Well done to Graham who had an excellent run but was never able to pass anyone and ran on his own all the way.