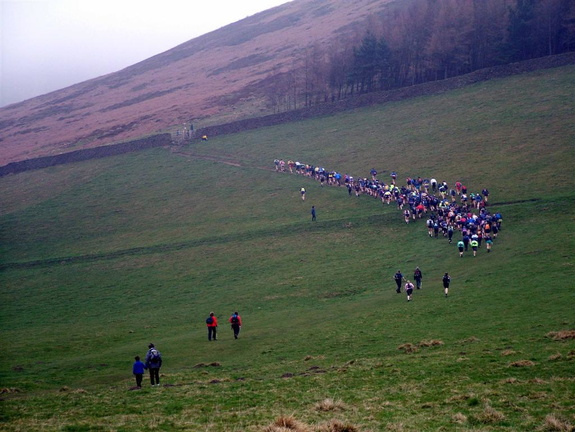 LIFE AT THE SHARP END!

Ever since the 1981 race, when I grimly pursued Rob Pearson and Tony Farnell on the directissimo route back from the Downfall (an experience which tempted me to give up fell running almost as soon as I had started) I had held the belief that there had to be something better than following Rob's backside (it can't be that bad as many hundreds of other fell runners have done so in the past, maybe the movement of his hips stir up some unconscious primeval feeling? - Ed). However, four failed attempts on his superb 1983 record was turning this belief into an obsession. In the weeks before the 1988 race I felt that I was chasing my own footprints around Kinder plateau in my search for the perfect route. It was getting too serious, I thought, when I spent half an hour deciding how best to negotiate the rebuilt sheepfold! At least my indecision over the route back ended when I found the deepest and vilest bog on Kinder on what had been my favourite route!

Race day comes at last .... I start fast, more positively than ever before. Make it hurt now, early on, I tell myself as I attack the climb. I reach level ground with my heart pounding and start what is the easiest of the three crossings. But I miss the short cut that I have found so often before. Don't panic, don't lose confidence, I reassure myself. Finish the crossing and head for Seal Stones, but its muddy, so muddy. Keep pushing. Plunge down the grassy descent, ford the stream, down the narrow rocky path. Relief that someone has opened the sheepfold gate - any help is valued. Turn at the bridge with a brief nod to the marshalls. Now for Fairbrook- Just behind my schedule, must get going, but I'm tired. I've gone too fast too early. A wave of self doubt takes over as I struggle upwards. Eventually my confidence comes back as I make myself look forward and up. Come on, I'm nearly at the top, and then it's all downhill (I deceive myself). I weave through the topmost boulders and onto the 2nd crossing. Tim takes my photo, I smile grimly. Hit the river with a splash, quickly regain my equilibrium and lengthen my stride. I don't smile or say anything as I turn at the downfall - sorry folks, but I'm a man with a mission! Glance at the watch, same time as last year. I'll have to do the final leg faster than ever before. I force the pace as I splash back up the river and turn off up the twisting, stony bottomed grough. Can't afford to make a mistake here. Clamber out of the grough, across no man's land as I head for Standing Stones. I'm still feeling strong as I focus on Grindslow Knoll ahead, but I'm tiring rapidly. The path is muddy and churned up. I try and remember all the little short cuts. Then I'm onto the easier ground of the contour path around the knoll. I glance at my watch and don't think I can do it, but I must keep trying. Across the tussocks to the top of the steep descent and the finish comes into view. Be positive now! I plunge down the descent and fall over rather than climb the wall. I look again at the watch and I know I can do it now. Stride down through the field, encouragement coming out to me. I leap over the wall (sorry Edale!) and collapse over the line. I've finally done it! Right, lets see how the others have got on......

Malcolm 'the Bruce'(1) Patterson
(1) Historical note: Robert the Bruce was inspired by a spider who made it on the seventh attempt. I made it in my sixth Championship but still, I like historical parallels!