Dark Peak Fell Runners
@dpfellrunners
RT @cbdgb1: A wee wander up Scafell Pike today with a spade and brush for @fixthefells and @NTScafellpike wondering why no litter. Bumped i…
7d • 18/10/2020 • 18:20

Dark Peak Fell Runners
@dpfellrunners
RT @TimBirchWild: Vigo our incredible #BeardedVulture has finally left our shores. The French Alps where she was born is calling her home.…
9d • 16/10/2020 • 12:57
Scroll down for more ... 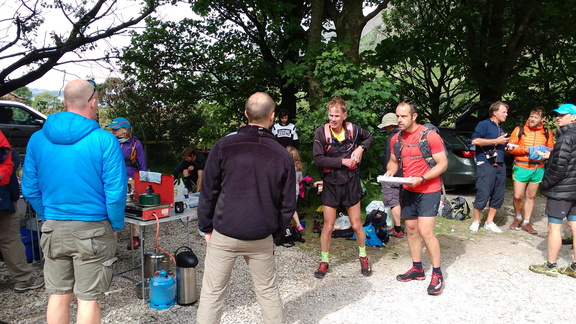 Contents of the historic Brasso tin more or less corresponded to the record entry of 51 participants for the 25th running of DPFR’s celebration of autumn’s arrival. Untypical wall-to-wall sunshine enhanced the anniversary party. The usual grateful acknowledgements are due to: all at the Royal Hotel for their support and hospitality; Mrs Harper for gracing the post-race ceremonies with her presence; David Sanderson of Woodside Farm for granting access to the flanks of Ughill Heights; Bradfield Parish Council, especially Eric who lovingly tends the tracks and paths; Sue Buckle who did sterling work at the finish (ably supported by memory-man Mick Stenton) having ensured on the Friday that there was tape every five yards around the bent-tennis-racket shaped course. Finally, thanks to everybody who turned up to make it, again, a very happy occasion.

The reputation of the Royal Dungworth is spreading into high realms, as is evidenced by the Valley Hill contingent from Chapeltown and the appearance of first lady Natasha Poole, representing OUCCC. The ‘moose head’ should make a nice talking point in Oxford common rooms. Tom Webb is to be congratulated for notching his third win, to have his mantelpiece graced again by the coveted Granville Harper memorial trophy.

These two were undisputed and worthy winners of their respective categories, while many others put in commendable individual efforts. The most spectacular of these was V60 Dick Pasley’s mustering of superhuman powers to hold off young Andrew Carr in a thrilling sprint finish. Controversy, however, surrounded entitlement Hiro’s Fan. (On the background to the trophy, see the report attached to results for 1990, 1991, 1993, etc.) Andy Howie arrived from Hayfield as firm favourite to scoop the award for a third consecutive time and thus to keep it in perpetuity. He managed to stay out of trouble, though, and side-stepped the conspiracy to fit him out with life-time possession of the grotesque simulacrum. His relief at this must have been much magnified by his joy at returning home as number 1 Knott Fell Runners man for 2009, the Royal Dungworth being their club championship race. Eoin Connaughton’s conventional ‘reverse Ughill Brook with tuck’ could have ensured success for him. The fact that he was not present at the award and speech-making ceremony in the Royal Hotel aroused suspicions among some of the old lags, however, and an intense forensic discussion ensued concerning the erratic behaviour of Tom Webb and Simon Bacsich. A strong case was made for the Fan to go to Tom for his lurch off towards Stannington in the final mile, an aberration on which Mick Stenton might have capitalised if he’d gone down on all fours in Ringwood Lane. Simon was charged with doing some diversionary footwork of such subtlety that nobody really understood what it was. A three-way draw was eventually declared and Simon (being the only one of the three contenders in the pub) went home with the trophy, to be passed to Eoin and then to Tom.

A date for next year’s diaries: the Royal Dungworth will take place on Saturday, September 25, 2010, usual place/usual time.