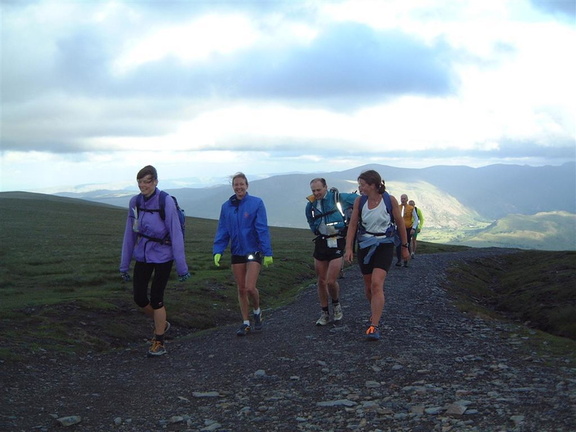 Having spent the previous evening typing in some more newsletter I'd missed the late night weather forecast and consequently had no idea what to expect as I arose, at what I regarded as the middle of the night, at 6.30 on Sunday morning. As the day dawned it was obvious that navigation was going to be easy again, a predominance of high cloud, and that the easterly winds were going to be much kinder than the gale force southerlys of the previous two years. Unlike previous years, I was physically prepared for the race having only run 40 miles so far that week, although mentally I'd not really given it a thought. As I warmed up along the cold blustery streets of Marsden my race plan unfolded . "run your own race, ignore the other runners, don't take it on like last year and pay the price!"
Starting to run at 9am in the morning is a shock to most people, but starting a 20 mile race requires a certain peverse love for the fells. Certain of us have it, others are just plain masochistic or stupid. The race started a few minutes late after the old white.bearded guru had had his say . a much more concise version of what a BBC weatherman does on an evening. Within yards Malcolm was off . "Have you heard the one about the man with premature ejaculation. ***" . whether there was some underlying link between the joke and the sprint to Wessenden one can only ask Mai. (NB The punch line has had to be omitted for fear of seizure by the contravening the obscene publications act).
As the stoney track brought my feet to life, with the rest of me soon following, and within a mile of Marsden, I found myself with a few yards lead and wondering if I was doing the right thing. I convinced myself that I was, as planned, running my own race at my optimum speed and if that meant setting the pace, then so be it. It wasn't long before a leading group of six or so detached itself from the main field, crossed the road at Wessenden and set off accross the tussocks to the west of Black Hill and to Crowden Little Brook. This is, for me, without doubt the hardest part of the race and I could argue is where the race is won and lost. Here the leading group of myself, Malcolm, Andy and Crowden.
Andy Trigg and Mark Rigby began to pull away. In fact myself drew away from Mai and Mark as we descended into
Crowden I eagerly searched the crowds for my support buttie . it transpired that he was drinking tea in a cafe in Holmfirth! A long walk up Rollick Stones enabled me to get a good breather, but also allowed the group of four to reassemble. At least I'd had the easiest climb, I thought. Bleaklow was free from its usual navigational problems as the cloud base was well above 2000ft and so plan two was put into action . run like hell from the cairn at Bleaklow Head and try to lose them in the groughs. This was not as successful as I had
hoped, so a breather between Hern Clough and the turn off point on the Pennine Way, was followed by a similar effort to the Snake road. Malcolm was the first to go . a victim of the previous nights exploits. Mark Rigby dropped back, eventually catching up again at the Snake checkpoint, but Andy Trigg was not so easily broken.
A strange sight appeared on the road, my support with a hot cup of tea. "Not bloody tea, water!" I cried. A few minutes later he sped past in the car. At this point a crafty thought occured, in the same vein as those of Chris Worsell's . "I wonder if they know the way?" A quick stop for some water from my support gave Andy the lead, closely followed by Mark and he led both of them into the river whilst I crossed the footbridge and took the lead again. "All part of the game" I thought. Fate was to have its revenge as Andy ran past strongly leaving me and Mark to fight it out for second place.
I'll omit the excuses and just say that the best man was third! At least I was rewarded with a PB by 14 minutes. I shall be back next year for more of the same but will.I ever run as many Trogs as Graham Berry, the only man to run all fifteen . I can't remember the seven I've already done