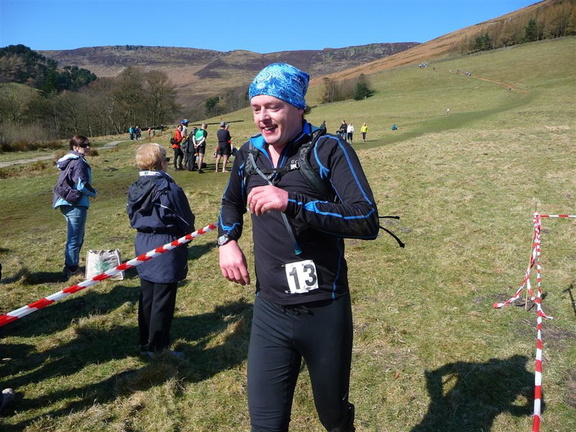 This years race was advertised as the "8th and Final" race. The landowner, the infamous Jeremy Archdale, has withdrawn his permission for the race to cross the moor around the Headstone, claiming that it was causing damage and erosion. What a load of ! Has he seen how many people walk to the Headstone in the summer, and he doesn't mind us running out there on Wednesday evenings (so long as we don't cross the wall) 50 at a time! I think he's just using his muscle after the episodes in the early summer. Enough of my grumblings, on with this years race..
At last Rob relaxed the rules and allowed th road to be used. This year the headaches returned! You should have done this long ago Rob. The question was of course "Is it quicker on the road?'"., and the answer was "Yes and No". The road route to Wyming Brook and across the moor to the Headstone was slower on the way out, but up to a minute faster for some people on the return run. The wind probably had a lot to do with it.
Just like last year, Malcolm was oblivious to the jinx which had plagued the yellow jersey for so many years, and knocked up his second consecutive win . not as easily as the last one though. After bodging the first descent, he eased past Andy Kitchen and myself to gain a 20 second lead at the Headstone* Some good downhill running by Andy saw him catch Malcolm by the forest road with myself a mere five metres adrift. Malcolm ascended to the edge as if there was no climb at all, Andy struggled and I crawled, thus extending the gaps to 30 seconds.
There was more fun over the minor placings with Andy Harmer and Mark Dyson opting to return on the road and pass Adrian Pickles and an irate Tony Farne11who was later heard to say "I never thought I was going to get beaten by Andy Harmer running on the road!" Tony had thought he was fighting for 4th place, not 6th.
Will we ever know which route is the fastest? Will the Headstone ever be revived? What will happen to the infamous Cake raffle? Who will eat all of Rob's mince pies? And what of the classic Headstone/Crookstone double? Watch this space for further details