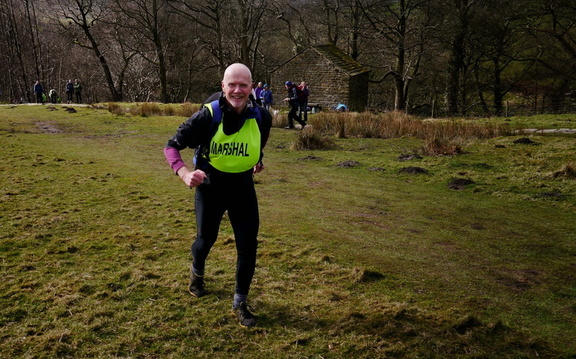 The day before the race, talk was of dehydration and water- provision. Saturday morning, water duly arrived thanks to the Irish sea weather systems. A cold, wet and misty prospect greeted both standard and elite starts. There may not have been the snow of the previous year but with a fresh headwind, drizzle and 10 to 30 metres visibility above 600ft it was to foe a day
for stamina and compass.
ELITE EVENT (for runners previously under 5 hours)
Over 30 runners set out at the usual fast pace along Ramsey sea front and up North Barrule. Backmarkers were perhaps going faster than usual to keep contact in the thick mist. For the first 15 miles on the more exposed northern hills, a leading group of eight kept close order. Further back, Martin Stone was proceeding at a steadier pace whilst Pete Lewis was wishing he
could proceed. Missing the second checkpoint he retraced his steps from the third, then descended again and missed the third checkpoint. It's a long race so he set off after the field, hopeful of recovering his position ... and twisted his ankle. Retirement was considered the better course.
Beyond St Johns (17 miles) the pace took its toll on many of the runners that remained. However, Brent Brindle wasn't one, he broke away from Jack Maitland at 24 miles and went on to win- Nigel Robinson kept going steadily whilst Martin Stone ran into a well deserved 7th place.
STANDARD EVENT - A winning perspective!
About 60 runners left Ramsey, looking apprehensively at the cloud not far above their heads- A day on which I was glad I had a support car for psychological, if not physical, support at the 10 road crossings en route. The opening climb is the domain of the inexperienced and speedy. No place for me, I was happy to head up North Barrule in 28th place. Up front the local father and son 'Hull', were trying, effectively too, to get well ahead so no-one would benefit from their local knowledge. The opening ridge could have been a plateau for all I could see, a few runners were already appearing a little unsure, in fact more than a few. As I took a conservative bearing to the third checkpoint, a glance behind showed 15 runners in a tight line behind! 6 miles gone, 8th place! At 10 miles this had changed to 6th, 15 minutes down on the leaders. Wondering where I'd gained the places, I set off on the most awkward navigational section where I joined Stuart Dick (Lancaster and Morecambe) who pronounced my lack of map as 'crazy'- Still, the 4th place runner we met, retracing a mile of his route, had a map and it wasn't doing him much good.
St Johns, 17 miles and a brief respite from the cloud. Hull (younger) was 15 minutes ahead, his Dad had stopped for a rest and joined us. At 23 miles the race video team were waiting with their commentary..."Mike Pedley of Dark Peak, the new leader!"
A disqualification for missing a control had removed second place and, unknown to me, the leader had almost collapsed at 22 miles and had retired. Just two of us now, 5 minutes in front of 3rd, 7 miles to go. Despite his map (with, I noted, the route marked incorrectly) Stuart was reluctant to lead. Bradda Tower, 29-25 miles and at last we were out of the mist. The legs found new life with the finish in sight and my lead of one or two seconds grew to 15. My first fell race victory and 12 minutes faster than my best time on a day when most people were 30 minutes slower and the elite winner was 57 minutes off the record!
The weather accounted for a third of the field retiring, the slowest race for many years. John Feist, however, ran an excellently paced race, moving through from around 40th early on to finish 17th, one of his best finishes for several years.