DPFR Juniors
@DpfrJ
A favourite destination of many a Dark Peaker and the junior races through the village have been the scenes of nume…
11h • 21/10/2020 • 9:13

Dark Peak Fell Runners
@dpfellrunners
RT @cbdgb1: A wee wander up Scafell Pike today with a spade and brush for @fixthefells and @NTScafellpike wondering why no litter. Bumped i…
3d • 18/10/2020 • 19:20

Dark Peak Fell Runners
@dpfellrunners
RT @TimBirchWild: Vigo our incredible #BeardedVulture has finally left our shores. The French Alps where she was born is calling her home.…
5d • 16/10/2020 • 13:57 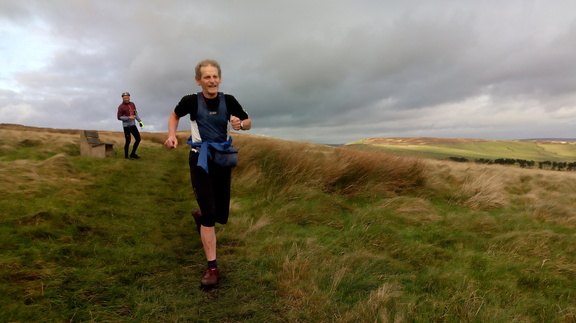 This was the inaugural 40 mils event organised by Otter Controls of Buxton to celebrate their 40th anniversary. The weather was perfect, although probably a bit too hot later on. The route started at Buxton then via the Qoyt Valley, Eccles Pike, South Head Lords Seat, Castleton, Tideswell and various White Peak Dales, Chelmorton and back to Buxton. An interesting mix of tracks, paths and road.

A very enjoyable and well organised event and although the prize list was not extensive (better than the Trog though!), the well equipped feed stations en route and the seemingly endless supplies of pie, chips beans and rice pudding at the end made this a real value for money event and well worth supporting next year. Somehow they still managed to donate £250 to worthy causes and all this with no sponsorship? How do they do it? Perhaps you'd better ask them, Tanky.
The course itself is pleasant rather than spectacular with an awful 4 mile section of road leading to Chelmorton just when you're getting really tired. Rory led the race from the gun, at one stage having nearly ten minutes lead which, despite our fears, he managed to hold to 3 minutes over a fast closing Stan Bradshaw at the end.
In the ladies race, Chez led all the way apart from one short spell when Pat Mee, an ultra distance specialist from Altrincham AC passed her. Fortunately for Chez, Pat took a wrong turning and Chez regained the lead with only 3 miles to go and increased it to nearly 5 minutes by the end. (Stories of Chez crawling along behind walls and hedges were rife at the finish but were heartily denied!).
Dark Peak did well to beat a strong Rucksack Club team hacked together from various clubs. (Paul Murray from Horwich, Chris Bulshaw from east Cheshire and Mike Cudhay.)

(Ed - Why does Alan always grumble about prizes? Don't you know we're all in it for the enjoyment Alan. Perhaps you should take up road running in America.)