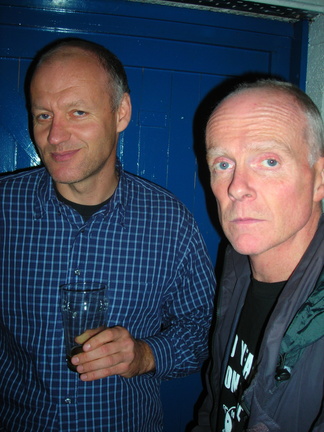 The 12 bore starting pistol sent 91 runners out onto the heather clad route. There were some good times recorded, but the course record remains unbeaten by ~7 minutes. Chris Barber used his GPS to show him the route (but still went wrong) and pointed out that our advertised 5.5m/650’ is in fact 6 miles 1180 feet of climb which will be corrected for next year’s calendar

Everyone seemed to enjoy the race, families and friends enjoyed the Sheepdog Trials, the food and the stalls. Sheffield’s premier Electrician sponsored the event as part of their 80th year in business so a Ken Jones designer t-shirt went to all runners and marshals. Prizes were bought on site from the WI stall comprising chutneys, jams, and fruit cakes. I can’t mention all of the volunteers who helped on the day (Registration / Marshals / Road Crossings / Results / other stuff), but special thanks are due to Hilary for organising me and to Graham Revell for the computerised results. As the last runner finished, Graham pressed the button and a colour coded results sheet appeared so prize giving could take place immediately allowing the rest of the afternoon to be spent outside the beer tent drinking Abbeydale Moonshine whilst watching one man and his dog

It’s always a popular event, just a shame it is during a busy weekend, but the first Longshaw was in 1898 so they won’t be in a hurry to change their date from the first weekend in September to fit in with the FRA calendar.

I made the basic error of listening to the organiser's pre-race instructions and "followed the runner in front". We found some interesting bracken, having somehow strayed from the path between Upper Burbage Bridge and the foot of the Plummet, but hey that's another lesson learnt.