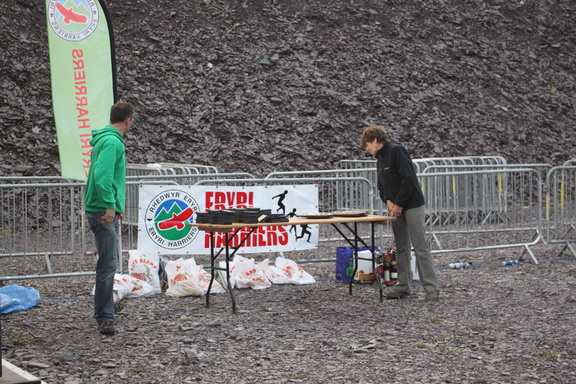 Ideal weather and perfect underfoot conditions round the whole course enhanced the usual gaiety of DPFR’s tradtitional ‘rite of autumn’.

It was a bumper turn-out this year, mainly because Penistone FR (long-time supporters of our race) had included Dungworth in their club championship series. Their lad + dad tandem of Lee (8th overall) and Steve Storey (11th place, first V50) put in a most noteworthy performance. The DPFR equivalent was former champion Graham Berry (35th: first V60 andfirst V65) backed up by son Danny (49th), who came in only just behind Penistone’s Ray Brown (1st V70). Knott Fell Runners’ club championship is traditionally decided by a single race (the Royal Dungworth). As Neil Goldsmith was their only representative on the day, he went home as their proud Club Champion for 2010.

A fair cross-section of DPFR elite (including a former Dungworth champion and the winner of the 2010 Lake District Mountain Trial, all of them crack members of SUOC) went off course in the final mile, with a longish detour via Cow Gap and return on tarmac to the finish field. Some allege that this was a rather extreme measure to avoid the eponymous cow dung on the track into Ringwood Lane. It’s not certain whether Shaun Dimelow (1st V40) was with this leading pack or whether he just pipped Mick Stenton (1st V45) over the official run-in. (In any event, it was a replay of 2009 for Mick, having come second last year to Tom Bell who had also done the Cow Gap deviation.)

Hiro’s fan was awarded jointly to the orienteers, for their collective aberration, with the Granville Harper memorial trophy going to Graham Gristwood (Mercia) who led the other lemmings home. If the front-enders’ claim on the vulgar simulacrum of the original fan had not been so irrefutable, then Dave Needham and Jim Fulton (possibly others too) would have been candidates. The ladies’ moose-head trophy, retrieved from Oxford thanks to the bicycle-courier services of Sean Ledger, went to Rachael Elder, whose time of 41.55 deserves applause.

Andy Harmer popped up from nowhere, completely off-cue, to compound the shambles of the race review and awards ceremony. He disappeared just as suddenly, having thrust into the hands of John Gunnee the grotesque neo-fascist Brugarolas trophy for success in the Loxley Valley rough running series. By the time the main business was completed John had composed himself sufficiently to be able to make an eloquent and plausible explanation for palming off to someone else the said monstrosity.

Tom Webb and his family kindly volunteered to do time-keeping and finish-line duties. Sincere thanks go to them, as also to the other people who contribute regularly to making the race possible and its being such an enjoyable event: the office staff and footpath team of Bradfield Parish Council; David Sanderson (for access through Woodside Farm to the turn-round at Jones’s Corner) and Robert Gray at Sykehouse  Farm (for offering a by-pass option round the slurry before the final stretch of Ringwood Lane); all at The Royal Hotel for providing warm hospitality, excellent beer + chip butties and such welcoming surroundings for post-race reflection and celebration. Sadly, Mrs Harper could not be in attendance this year to present the Granville Harper memorial shield. We here renew expression of best wishes for a swift and complete recovery from the effects of a fall suffered at home. We look forward to seeing her at next year’s proceedings, scheduled for September 24, 2011, usual time and place.

The historic Brasso tin has been decommissioned, to perform now a purely symbolic-cum-ceremonial role. It has been replaced by a sleek, modern-style cash box. The innovation probably explains why takings this year corresponded more closely than usual to the actual number of entrants. The sterling total of £52.90 has covered the following outlay: whisky for D. Sanderson, chocolates for BPC staff, R. Gray and Mrs Harper (£23.50); engraving of the Great Urban Fell Race tankard 2009 (£10: cross-subsidy, leverage approved by FSA);  new small shield with engraving, for Dungworth trophy (£15 estimate), leaving a surplus of about £5 to be carried forward as a float for 2011.

A final reminder that the 27th running of The Royal Dungworth race will be held on Saturday, September 24, 2011, 11 am start from the village playing field.