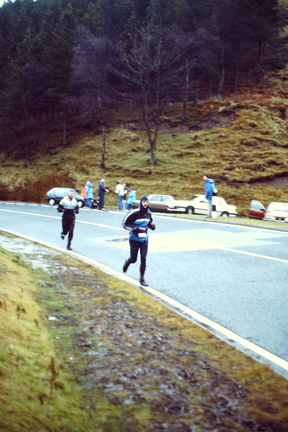 'Another fine day and a record turnout for perhaps the best fell race in the White Peak. 50 runners toed the line and 48 finished properly in the river - the other 2 failed to get their knees wet and so should have been disqualified. Several runners decided that the weather demanded a full submersion which could see next years rules changing to include such activities in order to get timed!

The race (for me) started pretty much as in previous years - a good'ish lead by the top of the fields allowed me to relax on the run down Monsal Dale. Unfortunately Mike Robinson had other ideas and caught me at the bottom. Running scared I managed to hold him off on the climb and pull away on the top and through the farm. Not wanting a repeat of the earlier descent I ran hard down to the A6 and also down to the finish and managed to set a new course record (49.34) and break 50 minutes for the first time - thanks Mike.