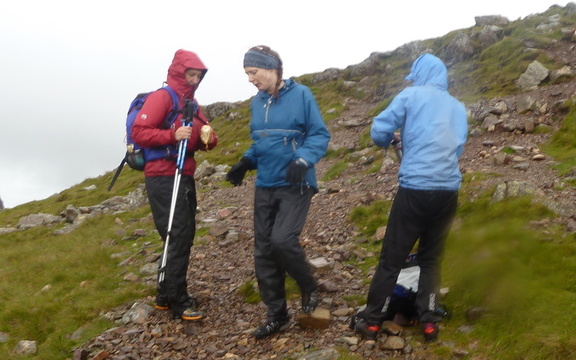 Congratulations to Neil Northrop who zipped round the course in a clockwise direction in the very impressive time of 53 mins 30 seconds. Especially impressive when you consider that he folded control G off the edge of his map and charged over Burbage South crags on a potentially suicidal route heading straight for control D. He was then spotted making a 90 degree change of direction after unfolding his map and realising his mistake. A gratifying 41 people made the start of this first Summer Sharpener of the year, and 36 finished with nobody getting badly lost. I hoped the course would pose some ‘macro’ questions about route choice, afford plenty of fast running, but also force people to slow down and pay attention to some ‘micro’ navigation as the controls drew near. The anti-clockwise options offered a fast and flowing start on a sweep through the first three controls, followed by a grinding climb over to Houndkirk Moor and then some very tough uphill running through deep heather to finish. The majority of people opted for this, but I think it was telling that some of the best orienteering brains decided the deep heather would be better tackled downhill with fresh legs. It was good to hear people arguing the toss long afterwards and still pouring over maps when they got back to The Sportsman. Sorry about the stolen control on Houndkirk Hill. I really don’t know what to do about this – the booby trapping suggestions in the pub were very tempting but probably thoroughly illegal! Thank you all for turning out. Hope to see you again next month when I’ll try to pose a fresh challenge for you all.