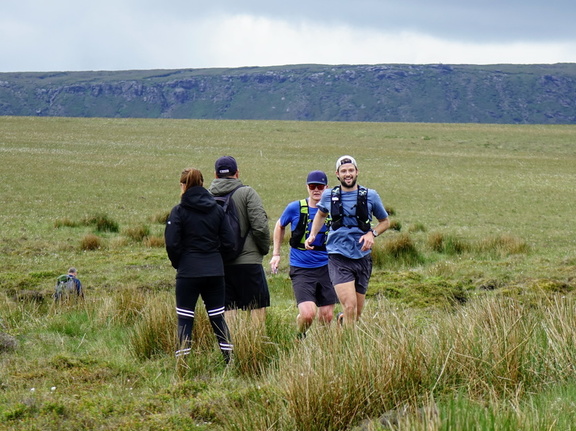 The earlier running in an attempt to dodge the midges failed! However the last person (from the mass start), who was Clive Last!! – ha ha – and he says it’s the first time, did get back in daylight which has been a problem when it’s run in August. A clash with the Calver race – shame on you who ran that – reduced the numbers from previous years to a, still good, 37. Neil and Matt arrived late and missed the start but I was there to time them so they set off in pursuit of the pack – Neil managing to pass everyone and, despite a slight detour on Cowms Rocks, finished first in a very respectable time for the soggy conditions. Neil is after the record but it has stood since the first running – better do it quick Neil you are getting older every year! Several more, including Neil, tried the direct route through the forest at the start – whilst shorter both Neil and I think its slower overall due to the slow overall pace through the trees. Beer and jam was handed out to the winners who made it to the pub.