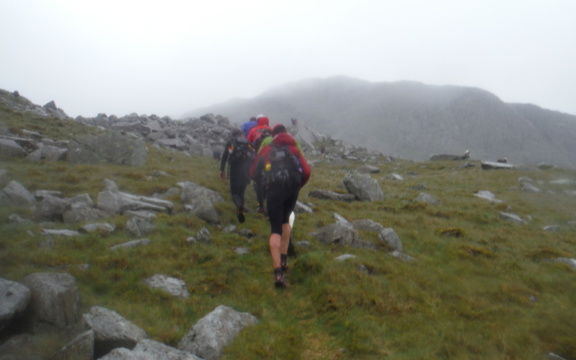 Race Organizer's Report (or Ruminations from the Rear-end)

Several blue-ribband fixtures in this year's fell-running calendar were affected by very poor turn-outs. The most conspicuous case was the classic Ennerdale race, which was cancelled at the 11th hour because only half a dozen pre-entries had been received. This was most lamentable. If the Ennerdale is revived next year, I think DPFR ought to make a concerted effort to participate with a good delegation. In my view it's the most exciting and attractive of all the big races, and it deserves much better support. Then there was the Hallam Chase, which attracted a meagre field of about only 25, even though this year the entry forms were circulated in good time and readily available. It's an event whose long tradition and special atmosphere really should produce more interest among the quality and the rank-and-file of the South Yorkshire clubs. Once again, DPFR might set an example by ensuring that we sustain and even improve our good record of participation in this local classic. (Congratulations, incidentally, to Mike Hayes on a storming run to fulfil his long-held ambition of taking the handicap prize this year.) Congestion in the calendar and complications created by holiday dates might have something to do with the 'absenteeism' we are observing. This seems to explain why the Rucksack Club had only half a dozen starters for their annual fell race. Dick Pasley and Paul Sanderson had put a lot of imagination and hard work into organising some excellent courses around Alport and Derwent. Nobody at all embarked on the long course (which would have been a good 6 hours'-worth); the short course was walked by two members, while the 'medium' category had just four runners. This, together with the fact that victory went to an interloper from DPFR with FRCC affiliations, might spur Rucksack Club members to turn out in bigger numbers next year.

The 2003 Dungworth race was also affected by the same blight. The Country Fair unfortunately coincided with the DPFR Bob Graham weekend and also with local events that kept away the usual merry contingents from Penistone and Hayfield. This did not detract, however, from the quality of the competition at the sharp end of the field. A real ding-dong race was fiercely contested between class acts from DPFR, Hallamshire and Steel City, with Stuart Maycock claiming the Granville Harper Shield by a margin of only 11 seconds ahead of our Rob Baker. The first six arrived home within the space of just over a minute. It must have made good viewing for the crowds thronging the showground, as it did for us tail-enders who witnessed how the race was evolving on the out-and-back section near Ughill. This inter-club rivalry is a new feature which, it is hoped, will enhance the flavour of the Dungworth in future editions, and bring out a bigger field next year. Watch this space...

On the day itself, Our Jud would most probably have benefitted from the competitive presence of regular Dungworthies, mixing it with him for honours in the top third of the field. However, conversation with Pete Delamere, sweeping/flag-collecting duties and rear-end ruminations prevented me from even aspiring to this role.

A footnote: the moosehead is retained by Tom Holmes for stuffing his Dad last year, while Hiro's Fan (vulgar simulacrum) is claimed, by default, by Alan Yates. He thus adds the title of Knott Fell Runners champion for 2003 to his first place in the Rucksack Club race mentioned above. Finally, thanks to all who helped on the day: Frank Galbraith (who took over registration and finish/timekeeping responsibilites), marshals (several from the Gala organisation) and the local farmers.