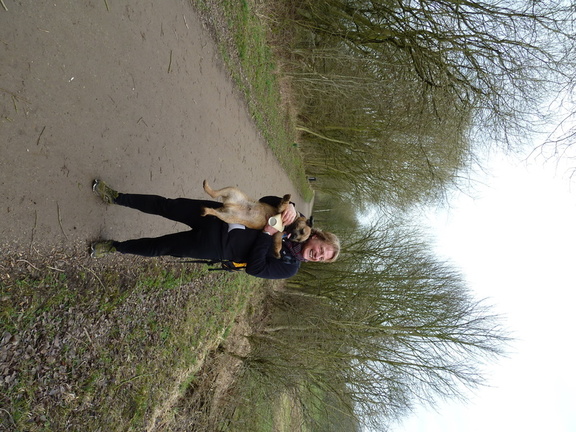 What a lovely day and what fun we had on the Rotherham Round 2012. Martin Payne lost his phone before he set off, he was already in a panic when he arrived as his co-pilot (Yates Minor) had taken him to 'the other Dearne Valley College'.

Richard & I ran together and kept with Martin & George for about 45 miles, it was good to see George there at his first RRR so we let him do a bit of route finding to add to our fun.

Mark Gray stormed past us just after Blackburn Meadows sewage treatment plant. If you look at the photo, you will see he has one red hand. This is not a glove, it is blood, but any loss did not stop him turning in an excellent 7hr 19min 5th place.

Richard and I overshot the route by Carlton-in-Lindrick which took us to an A57 crossing instead of using the tunnel. It cost us a few minutes, but we were compensated by the sight of an anti-aircraft cannon sited in the front garden one of the posh houses on Lindrick Road.

Mick Cochrane passed us on the towpath by Swinton lock, still running well, despite his advancing years.

We finished and cleared off before Rachel and John finished, not because we were doing well, more that it was beer o'clock.

Great to see a few new faces for this event, Rotherham Harriers & Athletic Club put on a really well organised and catered do. This year's tee shirt would look good to wear with a bowler hat and umbrella on an Apprentice Boy's marching season parade, we wore ours with pride in the Blake Hotel later.

For the 12th time, I encourage anyone who has not tried this event to give it a go. Ask me or ask one of the recent converts. Or, have a look at Henry Marston's RRR webpage which is packed with information, history and photographs about this 30 year old event.

NB: Rachel F-R rescued Martin's phone from the carpark where he had left it!