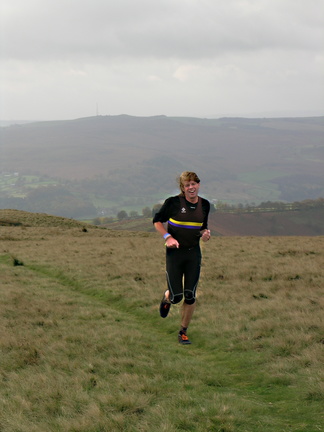 This year’s running proved to be fairly eventful, not only did we have one competitor that ran one too few loops, one who ran one too many and another who ran off the map!, but the later starters also had a Flasher – drunk and bare from the waist down – wishing us on our way down the first hill.  At the sharp end Rob Little’s excellent time from last year was eclipsed by two youngsters from Sheffield Uni orienteering club but Rob wasn’t to be outdone, being described as “like a steam train puffing an panting along Slinn Street” to set a new record and over a minute faster than last year.  Zanthe Wray smashed the Women’s record – embarrassing a few of the men along the way. New Cod on the Block provided the post race nosh washed down with much Thornbridge beer at the Hallamshire. The new ‘man on a spring’ trophy will be awarded at the next race.

The next race in the series is a new 7 Hills of Sheffield – with last year’s route proving to offer little choice a few of the ‘Hills’ have been swapped for others.  The post race celebrations will take place in one of Sheffield best Curry Restaurants – the Rajput.  Put the date in your diary – Thur 13th Dec.