Dark Peak Fell Runners
@dpfellrunners
RT @DpfrJ: Some happy Dark Peak Juniors having a break out there on the hill. Things are working well with the new, more regular term time…
1d • 16/05/2021 • 16:55

Helen Elmore
@GalaRunner
@amblesideac I was completely unbothered by #fkt used it interchangeably on one my @dpfellrunners tweets, it gets…
1d • 16/05/2021 • 15:18 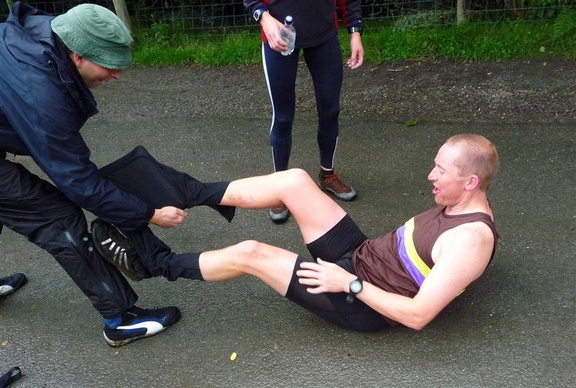 22 hardy souls met up for the third running of the 3 Tops. There were grey skies and a chill wind was blowing as the first group left. 15 minutes later the chasing pack set off. The first decision had to be made at the access gate with most runners turning up the side of the wood but a few went straight on heading for North Americas. Yesterday's sheet ice had mostly melted but there was enough about to make runners wary at times. After a brief shower the skies cleared and although it was still very cold it became quite bright.
The route choice was completely open and, although the lead 4 all went anti-clockwise, they went to Outer Edge by 3 wildly differing routes. Neil getting there about 200m ahead of myself, Iain R 100m further back with Greg Chasing. The only bit of the route that didn't have too may options was Outer Edge to Margery Hill but if you kept off the path there was less ice. From here runners were crossing paths so it was tricky to work out positions.
4 differing routes were taken to/from Mh to Pike Low with Jim Orrell managing to get a good Worsell on John and Moz. I'll look forward to seeing his and others tracks.
Try as I might I couldn't Worsell Iain  who slowly caught me. I managed one last sneaky line to get back in front but to no avail as he ran past me on the way into the woods. A great run from Iain as he did a winter solo PB two weeks ago. There were various "interesting" lines as runners missed their reccied route with both Simons going slightly astray. A special mention for Mr Bacsich who not only failed to find one of the tops but missed the path back leaving an anxious RO and some thirsty runners waiting for him. A possible early bid for a pertex me thinks.
I'm not sure who was first back going clockwise but if we can work it out I'll find you a prize...
First back was Neil but since he didn't get to the prize giving, the Gun Carriage went to Iain. First lady was Martha who also had to leave early but as I didn't think any of the men would want an ankle length stripey fleece jacket she got her prize in the car park.
Various home made jams and chutneys were handed out to the catagory winners but some how I couldn't get any one to accept the pink and blue waterproof full body cover suit for the most innappropriately dressed.??? this may come out for a later race.