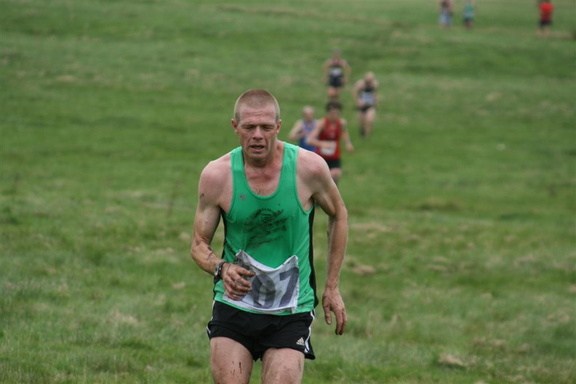 “What a brilliant idea for a race” – anon.  And so it proved to be.  A derivative of an old race visiting 4 pubs called the Sportsman from the (Dark Peak) club hut at the Sportsman Lodge Moor but with added bonus of being able to drink beer whilst visiting them!  A quick visit to the 7 Sportsman pubs on the map (there is one other in Sheffield at Norton and one beside the M1) to forewarn them of sweater runners calling in asking for warm, flat, low alcohol real ale was generally met with “they can buy what they want”.  All the pubs got into the spirit with locals asking where we’d been, where we were going next and commenting on the drinking capabilities of the previous runners.
The rules and scoring system (see map) was simple: no lager – must be hand pulled ale/beer, no more than 1 pint per pub.  Women and very old gits (‘VOG’ in results) could double their points by drinking a half, second half worth half points – so a VOG visiting a 40pt pub and drinking a half would get 100 points.  The fact that the Denby Street Sportsman was closed allowed its beer (and points) to be drunk at the Cambridge – causing incredulous looks by the locals when messrs Hales and Fulton ran in and ordered 2 pints of Old Peculiar each – and they were, Hakes and Fulton that is.  Bonus points, 1 per minute, were awarded for finishing early and penalty points, 5 per minute, were deducted for being late.
It was never going to possible to visit all 7 pubs being over 15 miles and 3 very big hills and so Alex and Karl’s differing routes visiting 6 each was pretty impressive – if only they’d had one pint one of them would have won.  And so it was that the oldest person – pleading not to be a drinker – drank 1.5 pints and won.  Those who drank 3 pints did well to find their way back.  We are all looking forward to it again next year – with several pleas for a summer version too.