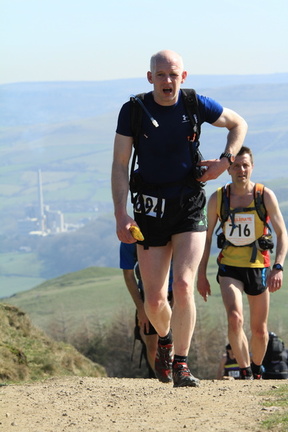 The yin and the yang of British fell running together with the quintessence of the DPFR ethos were experienced and enjoyed over the weekend in question: shoe-string domestic informality, first at Friday evening's Loxley Lunge as prelude to the Dungworth traditional rites of Autumn, followed on the Sunday by the mega-production of the (postponed) Edale Skyline as FRA national championship event. It is not recorded that anybody took part in all three races. What will be remembered, though, is the harmony of the combination and the perfect Indian-summer weather in which the trio of events took place. The distractions, competitive and administrative, of Skyline preparations probably accounted for the slightly reduced turn-out at Dungworth. And this, in turn, highlighted the strong Penistone presence and that club's consistent fidelity our race over the years.
Fears of overbooking at The Royal Hotel did not materialise. The programme of the fiddlers' convention being held in the village over the same weekend kept them out of the pub until we had vacated it on Saturday lunchtime. Dark forebodings were thus dispelled, and the prospect of fisticuffs, fiddlesticks versus fell shoes around the bar, did not materialise. Once again, we are indebted to our own Royal family for their continuing support of the race tradition and for their hospitality.
The bent-tennis-racket configuration of the Dungworth course was slightly modified, with a loop through the fields at Woodside Farm to approach Ughill Heights, and this met with unanimous approbation. It is hoped that this might become a regular feature in future. Special gratitude is due to farmer David Sanderson for his thoughtfulness in devising the elegant route variation, over and above his usual general support.
The results below tell their own story, beginning with 'gentleman cyclist' Simon Choppins' storming run to carry off the Granville Harper trophy. Stephanie Coe took the ladies' Moosehead with a time which is probably a record for any of the course variants.
Given the perfect conditions, the impeccable course marking and people's increasing familiarity with the intricacies of the route, there were no serious contenders for Hiro's walkabout fan. However, after much heated debate, a show of hands among the faithful awarded that trophy to Messrs D. Holmes and T. Hawley, not for getting lost anywhere but for tergiversation, subterfuge and base chicanery. The two were discovered to have conspired to lurk and take tea chez Hawley, overlooking the finish, and then fake a dead-heat final sprint after they had watched Chairman Westgate cross the line. His time had made Tom the new holder of the grotesque neo-fascist Brugarolas trophy for the victor in the 2013 Loxley Valley Rough Running series, for which Holmes and Hawley had been neck and neck favourites, the outcome depending on Dungworth results. Angela Hawley had publicly declared during debate on the award that she would divorce Tim if that artefact ever came into their house again. It is not known how she will react to having to live for six months with the vulgar simulacrum of Hiro's original fan.

The next running of The Royal Dungworth will be on September 27, 2014.