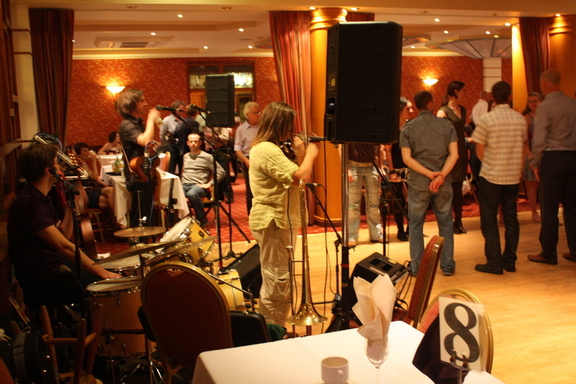 The bus left the Leadmill at 9:15 and without mishap arrived at Dunford Bridge junction on the Woodhead Pass with a full compliment for a prompt 10:00 start.

The route took us off to White Stones just beyond Bleaklow Stones, and then into the Westend & the Raven Clough sheepfold, across Alport to Oyster Cabin, the 4th Kinder Spring, Grindslow Knoll ponds before a finish and a cup of tea at the Edale Station cafe.

We were promised showers but instead we were rewarded with warm sunshine.The field had a noticeable sharp end with Neil trotting around in a sharp time.Speaking to Rich Hunt after the finish he said “there was actually some good running”which was perhaps a surprise to us all.

I usually report on the wildlife during this report but it seemed sadly lacking today, bar the odd vole, as is the way these days.

A competitor's view (from Graham Berry)

The lady and the men in tights queued outside the Leadmill for the substitute 57A bus which today was the Rivelin Coaches minibus (kindly organized by our Chairman together with the race itself). It duly arrived and later picked up Andy and Kriss in Hillsborough and Oughtibridge before arriving at the Dunford Bridge turn off on the Woodhead where Roy was anxiously waiting. There were at least two groups in the twenty runners assembled at the start, including those at the sharp end and those at the not so sharp end of the competitive spectrum. At 10.00am, we were off and almost immediately, there were route choices taken with some heading for the Far Small Clough track by the fence and others, including Neil, Gavin and Bob, heading over the moor towards the main watershed path and the head of Far Black Clough and then on to the first check point of White Stones. Whilst the weather had been slightly murky at the start, the White Stones were visible so there was no need for detailed compass work for Maurice and I to reach there. We were closely followed by Tom, Jim, Clive, John, Fi, Roy and Andy. By this time Bob was well in front and skirting around the left of Bleaklow Stones. This group now spread out to find the Westend river. This was either followed in the valley or on a higher path. The latter route did not prove to be so very clever since I managed to overshoot the sheepfold before being reminded, helpfully and ironically, by Tom and Jim (one several encounters) that it was a bit further upstream! I was not alone, Roy passed the sheepfold and continued down the river before recovering the situation. After duly visiting the sheepfold, I spent (wasted) more time refolding the map to accommodate the southern part of the route. Having emerged from Ravens Clough, there was boggy crossing of the top of the Alport before a steep descent into the valley narrowly missing an even steeper, lemming like cliff descent into the river. Clive, John and Maurice were just behind and we all enjoyed (!) the climb out of the Alport valley.to the edge path which was followed for a while until it was time to head over the moor to Oyster Clough and its cabin. It was a bit disconcerting to see that Neil and the other leaders had signed in quite sometime before. It was so much earlier that, in the trauma of it, I forgot their actual time at the cabin. Tom and Jim were just behind at the cabin but soon caught up (yet another encounter) when I faffed about trying to find a direct descent to the Snake Inn which we completed in true Warts style. At Fairbrook, Tom announced that he could smell the whiff of competition as we raced (well, I thought so) up the valley. The direct line via Upper Seal Clough to the 4th spring, beckoned and, happily, there was a shooter’s path which made the going relatively easy. By this time Tom and Jim had disappeared and Clive was within sight coming up from Fairbrook. It turned out that Tom and Jim had approached the 4th spring from Middle Seal Clough resulting in no more encounters. The climb up to Kinder edge was not so enjoyable and it took a couple of Jelly Babies to get there. However, the almost cricket pitch surface of Kinder towards the head of Grindsbrook made the climb all worthwhile. Nevertheless, it was a long way down Grindsbrook towards Grindslow Knoll which was bypassed to the right to reach the two ponds. The direct descent entertained my knees along with the stretch of road to the station tunnel and the café. All the early finishers had vanished and, by then, were probably in Sheffield. The remaining group was basking in the sunshine on the pavement with their trays of tea and cakes. Not long after came Clive, Tom, Jim, Maurice, John and Fi. We had only a little time to enjoy the tea, etc. before the 14.32 train arrived to take us on quite a jolly trip back to Dore and to Sheffield. Whilst this was going on, Andy was watching the train leaving Edale from the slopes of Grindslow Knoll. Whilst we felt a bit guilty leaving him behind not knowing then where he was, Tom kept the club’s conscience clear by staying to wait for him. Andy reported that he’d not had one of his better days and had to lie down on the climb to Kinder. In any case, Andy got home earlier than he would have done because Ian W happened to be in Edale to give him a lift back to Loxley.

What a splendid day out, very much in the spirit of fell running and racing.

Update 8 May - times at Oyster Cabin added (thanks to Dave Sykes for bringing the times back). The order didn't seem to change much except that Graham passed Jim and Tom, Roy made up for an earlier navigational error, and Fi overtook John whilst he suffered cramp on the crossing of Kinder.