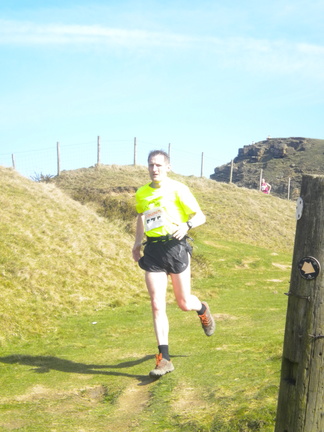 Either the weather or the lure of the Carver race contributed to fewer numbers this year.It didn’t detract from a good race with the leading 3 (Ralph, Richard and Tim) changing places a few times until Ralph took a detour off Cowms Rocks.It’s a poor person who can’t win his own race and so Tim proved the theory right with another win at age 54 – almost 30 years after the inaugural race.The soggy conditions underfoot, but with no rain during the race, made the conditions tougher than usual and so no records were on this year.

Having not run the race for a few years due to various injuries it was good to remind myself what a good race it is – the dropinto Oyster Clough must rate as one of the best with short bilberry at an angle that allows a ‘let yourself go’ descent – and I’d forgotten just how steep the climb out of Alport Woods is – real hands and knees stuff!If you have run it yet put it on your bucket list.

Post race beverages of well conditioned Moonshine in the revived Snake Inn was followed by the prize giving with jam, pickle and beer on offer.

And a report from Graham

Arriving at the car park at Birchen Clough, I was greeted by the wise men of DPFR, Jeff, Roger B, Bob M and by Dick who said that the Alport race was not only the first fell race he’d done but also his favourite. The wise men set off up the steps well before the 18.45 start to the first hill and then over to the edge to admire the view of the Alport valley and the trig, from a safe distance. Next to start through the woods, this time, at 18.15, were the past club secretary Andy and the BG supremo Richard who had cycled to and from the Jura race, taking a “short cut” through Ireland on his return. The next off, at 18.30, were Clive, Maurice and the webmaster John. They followed the same route as the wise men by going up the steps. The mass start followed in the same pattern by splitting into two groups, some up the steps and some through the woods where apparently Andy had earlier taken an adventurous and dangerous route into Birchen Clough ravine costing him 10 minutes (his estimate). The rest of us climbed out of the valley and then ploughed over the swamps and groughs on the top, anxiously awaiting the splendid yet intimidating view of the Alport valley. Lucy, fresh from her BG round, and Fi, recovering from her first Duddon, descended into the Alport following Tom’s line avoiding most of the rocks. Tom’s line to the river can now be added to other notable features which have been linked to him, i.e. Tom’s Tree, Tom’s Waterfall and Tom’s Wood route at the Alport race start. Tom modestly denies all such attributions apart from the waterfall which he claims that he is the only person to have climbed it. One day these “Tom’s” could be linked to produce a unique race route.

Despite its steepness, the climb out of Alport is amazingly encouraging in that people in front are much closer than they had been on the descent into it. This encouragement is sadly an illusion and only lasts until the top when time and space seem to expand (is this proof of relativity theories?). Fi and Tom had pulled ahead both providing a clear but, unfortunately for me, a now distant view of their pink and orange tops. In the meantime, whilst Simon was setting the pace on the Alport Castles edge path, Ash passed cheerily by saying he was actually enjoying the race. Simon, Lucy, Dave S and I continued the descent to the river crossing which I vainly hoped would refresh legs and feet. Not so, there was no sprinting out of Alport hamlet and through the wood. The steep and surprisingly soft going up the firebreak made it feel as if the hill was climbed twice, step up, slide back, step up, slide back……… The last moor crossing provided a short but welcome quad bike track (can this vehicle be both quad and bike?) before reaching the edge which gave a final view of Tom’s orange shirt at the Oyster valley crossing. Simon and I were then left to battle it out down into the valley and through the woods to the finish.

All in all, this is another classic Dark Peak race which, this year was, at last, won by the organiser Tim who awarded Stewart, Fi, Gavin, David L and others prizes of home made jam, the plum variety nearly being handed back when Gavin asked if they were Tim’s plums!