Dark Peak Fell Runners
@dpfellrunners
@lliongerallt Its Rob Davidson, member of our running club. Good work Twitter. Follow me and I can dm you and share details
3d • 29/03/2020 • 13:04 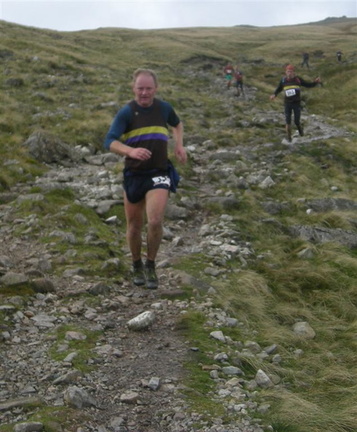 Thirty or so competitive runners, bright sunshine, little wind, a good frost with a sprinkling of snow and seven white hares made for a splendid birthday race! My thanks and appreciation to all who made it such a memorable day. Congratulations to all the finishers and winners, including the first man and lady, John W and Fi.

The scene was set early as we gingerly drove up the icy road to King’s Tree passing the almost flat calm waters of the Ladybower, Derwent and Howden dams. The bright sunshine made a change from the recent DPFR experiences of wind, rain and thick mist. Apologies, therefore, were duly made to those expecting the damp and the mirk for the race.

We had three approximate start times of 9.00, 9.15 and 9.30 am though this caused some confusion for runners working out their own times at the finish! Even on the start line, discussions on route choice were going on whilst the reminder was made that tarmac was strictly out of bounds. After the Linch Clough gate, we all dispersed, some immediately into the clough and some up the main track and others in between. My simple approach was that a westerly bearing followed by a return easterly bearing, would do the trick. Ridge Clough was skirted round (just) and a small group of us, Ruth, Andy, Clive and others descended into the Westend avoiding wet feet by crossing the bridge except for Andy who made a competitive break by going for the direct and wet, line!

The unmapped quad track to the north of Black Clough and out of Westend was a fast running opportunity for those who could and it brought us all the way up to the Alport ridge. Descending into Alport via Miry Clough gave a fine view of the next climb to Over Wood Moss where Gavin (who declared himself as upper class on the signing in sheet) came flying by having been on an alternative (!) route. By this time, the white hare count was about four with three more on the return leg.

After going over Over Wood Moss, Ruth and I descended to the hut where our ways then parted, with her group following Upper North Grain to Alport. I had the benefit of meeting Jim and Tom on their way into the hut as I returned to Alport via Over Wood Moss, crossing the river near the waterfall. The sheepfold at the bottom of Ravens Clough was hard won after what felt like a long crossing from Alport. For future reference, the Upper North Grain route proved quicker to the sheepfold. From there, Fi sprinted ahead down the trod in the Westend before we climbed out across the zig-zags to the ridge where there was a divergence of route choice. The main group headed towards the upper reaches of Linch Clough and, for me, there was a pleasant and lonely trip down Black Dyke. In the very solitary descent into Linch Clough, I experienced a self-delusional fantasy that I was winning. This was soon shattered as Ruth, Fi and others suddenly appeared from out of the blue at the gate. Never mind there’s always next time (another fantasy!).

At the post race analysis, there had been some interesting route choices and I’m not sure which of these was the optimum one. Nevertheless, we all returned safely after a splendid winter outing. It was great to see so many out enjoying the event and it was a pleasure to welcome back John D, Mark and Steve.

Maybe we could run the race again next year??????