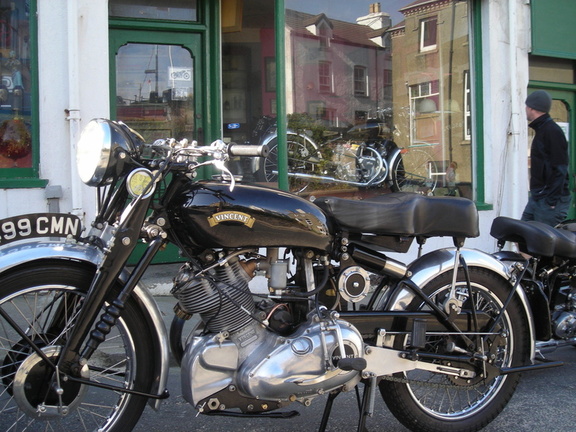 A short route because of the snow (the plan was to go to High Stones then pick up the route back at Howden Pond):-

Although conditions had 'improved', even from mid-week there was plenty of deep snow throughout the whole course. Neil and John led the way and either thought their snow ploughing efforts had been enough, or thought the followers may be happy to drift left at Wet Stones as they cut the scheduled race short. In fairness the organiser implied this could be a possibility. Undeterred, the chase, led by Richard, struggled and Dave Lockwood in the 31st running of this early season classic. (sorry, not sure what Dave Lockwood did or didn't do, ed)

The not the Margery Hill race route was set up at the Wednesday night Club run, from The Royal at Dungworth. The snow conditions on the Wednesday run were such as to convince the Cap'n, the RO, to shorten the route by missing out Margery Hill, Cranberry Clough and the gate, visiting instead High Stones before rejoining the route at Howden Pond. And to make it easier for the followers in the race, we would all set off at the same time, 9.15, thus allowing the fast boys to snow plough the way for the elderly and infirm followers. Conditions seemed relatively benign at the start though questions were asked about the compliance of the Buffalo top (not waterproof, though warm when wet!) to the required FRA rules for competition safety gear. Nevertheless, I started, though with some concern about my eligibility which I believe explains my finishing time! Even just after the start there were at least four route choices, up through the new access path (Fi took this), up the dam wall steps, up the longer route to the dam wall, through the access gate at Hollin Clough and through the field to the left of the Clough. This tendency for route variation was soon to change! By Lost Lad, we were all in the groove though Matt H, a late starter, bounded down in fresh snow over the moor towards Sheepfold Clough leaving Simon B and I for dead. Abbey Brook was crossed without incident and without getting feet wet though the path out of it was not necessarily the best line through the snow which occurred in many states, strong crusty, weak crusty, soft, icy, slushy, hard packed, fluffy, powdery,…………………… any more suggestions? This diversion into thoughts about the snow types enabled Fi and Andy and Simon to catch up along Howden Edge towards High Stones. Here we were encouraged to see no more footprints, were we in the lead? The answer came soon enough as other footprints emerged and converged on High Stones. No groove was found until later in Howden Clough so we embarked on our downhill snow flounder, eventually sliding gracefully towards the Pond. Besides spotting three white hares on the route we also a group of nine (super) humans heading over the crest towards Abbey Brook. A check on timing showed they were about 13 minutes ahead. Whilst our descent into Howden Pond had apparently been graceful, Clive's descent had been straight forward fast as he now joined us for the climb out. We were now five, Fi, Andy, Clive, Simon and I. Grooving took us to Abbey Brook (wet feet this time) and the Cogman cabin. By now the yellow trousers of Moz and the figure of Richard H were in view. They had chosen to reduce the RO's anxiety for them at the finish by doing the not, the not Margery Hill by diverting from Wet Stones to the cabin. Climbing out from the cabin another figure also came in sight, Dave L had been tantalisingly ahead for some time and although the gap seemed to decrease we didn't catch him. Hancock's Pond was, as always, hard won with the snow adding an extra degree of challenge to the rocky, heathery contour. Fi was now tasting victory and led we five to the finish. Bottles of beer prizes were, I think, given to the first home, the first lady (Fi) and the first V65 (Dave L). Thirty years on and the Margery Hill race still holds its charm and challenges. Thanks Andy for devising and organising the race, yet another great adventure!