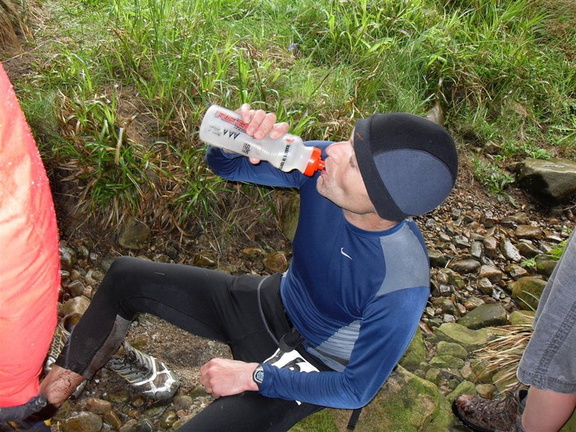 For once the 57A was not blessed with fine weather although the late finishers, yes that includes me, were blessed with some much appreciated Spring sun. The first tactical move was by Eoin Connaughton who never made the bus and perhaps stayed another hour under the quilt. It was pleasing to see lots of new faces who all performed well and hopefully enjoyed the big empty spaces in the Northern Dark Peak despite the strong winds and mizzle for long periods. At the top end a fine run from Richard Hunt with Gavin Williams & Dave Sykes not too far behind. Sally Fawcett also clearly had a good day.

There were some tactical errors with Tim Hawley leaving his latest phone come GPS, apparently with the latest 1:25,000 mapping software we are told, on his kitchen table and then compound the error by teaming up with Tim Rippon to eventually find the first checkpoint, in clag, some fifteen minutes after the "sweep"? had been through. Maurice was also in a generous mood as he decided to circumnavigate Alport Castles before taking the plunge to descend to the pond below. Hakes Cakes provided a ginger cake for Oyster cabin which somehow stretched to every man and woman in the field, a somewhat biblical achievement. On a serious note, fooled by the recent Spring weather, some of us, yet again including me, were underdressed for a long, wet, day out and so finished the wrong side of cold.

For the record the route was Woodhead Station, Swains Greave (in the bowl at the back of Barrow Stones), Black Clough stream junction, Alport Castles pond, Oyster Cabin, Kinder 1st Spring, Kinder summit, Grindslow Knoll ponds for a finish and debrief at the Edale station cafe. The distance was subject to a modicum of inaccurate measuring beforehand but came in at 16:39 miles according to Jims technology.

All in all a tough day hopefully enjoyed by all.

Saturday the 7th of March was a wonderful day with the temperature reaching 14⁰C in Sheffield though with a bit of a breeze. This was to give a misleading impression of what the weather might be like on the Sunday when the starters gathered at the Leadmill to catch the Tom Westgate bus (formerly the 57A) to the Woodhead station. As the bus travelled further west, more rain and mist appeared on the hills and the bent trees and vegetation gave us a clue about the wind strength, i.e. high!

The 20 of us were spared some of the wind in the shelter of the valley at the station as we set off for the first check point at the small sheepfold (estimated by Willy (?) to have a capacity of 3 sheep). There had been some discussion on the whereabouts of this sheepfold because it seemed to be marked only on an old Harvey map, not on the newer one nor on any of the OS maps. Nevertheless, the expert navigator, Bob, lead a group of us to it and, yes, it is small and in a gulley so that it is only seen within about 5 metres of it. The climb from there to between Barrow and Grinah Stones took in a small post with a sign indicating the source of the Derwent. For such a river source, it is disappointingly bleak, there isn't a bubbling spring, just a bit of peat! Onward, the route took us (Andy and I) down Grinah Grain to the Westend river for a climb up and over to the Black Clough stream junction where Tim H had caught and passed us as we then headed for the Alport edge path. Over these exposed moors the westerly wind was nicely cooling but there was some relief as we dropped down to the pond beneath The Tower in Alport castles. This large and significant pond also doesn't appear on the Harvey and the OS maps that I have. Lewis now joined us and pushed on up through the woods on the opposite side of the valley. As it turned out, this was the last time I felt warm because as we emerged from the woods the wind hit us directly and was now combined with increasingly heavy rain. However, it was a real joy to reach the Oyster cabin where we were rewarded with a slice of some wonderful cake, thanks to Di and Richard. That was a real treat. Lewis wisely stopped here to don more weatherproof gear.

The next checkpoint at the Snake Inn involved a classic bit of Harmerian ground, with tree roots, semi cliffs and swamp. By this time, Lewis had crossed the river and was climbing steadily up the path towards the Ashop valley. The wind and the rain had now increased to its full frontal intensity and whilst the mind was still in some sort order, a waterproof top was put on, though with some difficulty in the wind! The first spring was reached and here apparently, as we learned later, Tom and Jim hailed us but to no avail, we just did not hear them. The cold was now becoming serious and my mutterings of going down to the Snake or going directly to Edale were thankfully ignored by Andy. Over a grassy part of the plateau, we reached Kinder Gates and followed the river up to the high point marked by a post in a small pile of stones and by Lewis who promptly sprinted off towards Crowden. Whilst the rain was now easing and the sun was shining (!), the wind still provided a bit of chill which moderated as we dropped into Edale and then to the café where we had a very welcome pot of tea and some cake. As always, there was considerable analysis of the race by all in the comfort of the cafe. Warming up now started and continued in the car back to Sheffield. By chance, Charlie had been out for a run from Edale and was going back to Sheffield so Bob, John W and I had a lift to back Ecclesall. Many thanks, Charlie.

Also many thanks to Tom for organising the race, the coach and the white hares; at least 4 were spotted.

Now for an extra bit!

For me, there were lessons to be learned about mild hypothermia and how to minimise it. I realise that these comments and many more are already contained in the FRA/Ian Winterburn information.