James Pierce
@InvisibleJim1
Five years ago incredible scenes as we supported @NickySpinks on her #bobgraham round record attempt. This pic does…
3d • 5/04/2020 • 9:57

Dark Peak Fell Runners
@dpfellrunners
RT @peteblandsports: As we begin another month, our shop remains closed and the vans remain off the road. So online it is and another disco…
4d • 4/04/2020 • 8:47 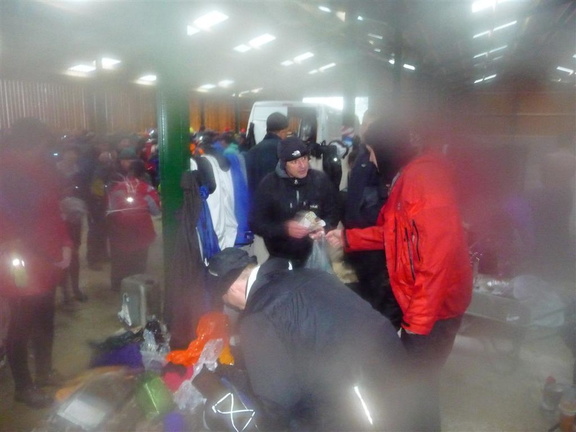 Burbage Skyline on Tuesday 12th May 2015

Having no plans to move to Kendal (unlike the two previous ROs), our former Chairman accepted my offer of organising this classic early season race way back at 2014's AGM. And what a great race it is, right on our stomping ground too - although not without some issues, such as the rather cluttered start, which is why I decided to place a race limit of 400 on things, being what I expect is about capacity for the course. This, and rather fresh and windy weather, may have deterred a few souls, and our brilliant registration (and results) team of John D, Ralph, Kris, Roy S, Les and Pete counted in 288 runners in the end.
This at least enabled a swift start, right on cue at 7:30, which was a good thing as is wasn't long before the Burbage valley's latest addition, a small number of highland cattle, descended on to the start line (it turns out that they would have arrived earlier were it not for Bob Berzin's shooing!) The cattle had been my big worry. Nicky had assured me that highland cattle were docile, lazy and easily moved – but there is no getting away from the fact that they have very large horns, and I have to admit that after last year's mauling at Tiger's Todger, this was foremost in my mind. As such, I had tasked Willy as roving cowboy as well as John Brownell and Richard Hunt as extra marshals and cattle spotters. Shortly before kick off a there were two sightings – a herd at Burbage South quarry – that ultimately descended on the start line - and a second herd somewhere near to Owler Tor.
Fortunately for runners the race was 100% free of bovine interruptions, and in all we just had 5 retirements, all from minor injuries I believe, including our own Kirsty, and I wish all a speedy recovery. The men's race was won by Tommy Horton of SHUOC in a fantastic time of 37:13. In fact the first 21 places were won by male Seniors, before Dark Peak's Simon Dixon came in as first vet in 43:48. I am delighted that Helen Elmore won the ladies' race, something she is very used to doing – and Dark Peak won both first team categories. I received some complements on this year's prizes – fruit, cakes and other goodies from Seven Hills Bakery, but I must confess to being in a bit of a tiz at the prize giving and it is just possible that I may have missed out a category or two (if so – apologies, an honest mistake, please try again next year!)
I have to say a huge thanks to all of the fantastic marshals: Simon, Mike, Sarah, Charlie, Rich B, Lynn, Andy B, Mick, Julie, Will D, Phil C, Ian, George and John W; sweeps Dave Taylor and Simon (again); and time-keeper and finish line organiser (and all-round wise-man) Richard Hakes and his team including Jim, John G, Tom, and Bob (as well as a number of marshals doing their second job of the evening); plus all those who offered and gave help on the night including Kevin, Carl and Tim (and others too). I also want to thank Roy Gibson, Dark Peak second-claimer and now Kendal resident who has been guiding me through the RO process right through the year. I'm delighted that you got to turn up and have a race this time Roy! I think most of you got a well-deserved Rescue Ale – and thanks to Ian W for sorting these.
As always, thanks to the Fox House for accommodating us – even putting out jugs of water as they knew bar queues would be long. Huge thanks too to Matt and the team at Edale MRT and thanks too to Sheffield City Council and Natural England for permissions and our interesting cattle discussions!
Any comments / feedback gratefully received.

Until next time, Paul Fauset