Dark Peak Fell Runners
@dpfellrunners
RT @MoorlandMonitor: ✴️LARGE SHOOT ON MOSCAR TODAY✴️ A shoot has been reported south of the A57 at Hollow Meadows. This is close to popular…
4d • 26/09/2020 • 12:23 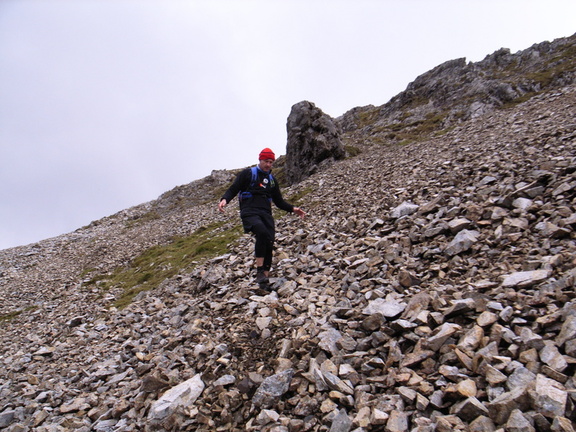 The forecast for the day had been holding steady all week with cold and windy weather and heavy rain starting from midday. It is as well it played out almost exactly to plan; by the time the last runner left the hill, it was truly disgusting. If that had come in early, it would have been unpleasant for runners and really hard for marshals.

A big thanks to all of the marshals from both Nicky and I. Ian Fitz's perch looked uninviting, catching the wind that it was. Sally and Rose had a modicum of shelter from the lump that is Pike Low, but they didn't look warm. Chris and Tony might have had options about hiding behind a Cake, but with runners coming in from all angles, they opted for standing in plain sight, with not a lot of shelter.

I have no idea how Olwyn, Charmian and Mick managed to do such a good job of the results with fingers that must have been wooden. Mine were numb before I even started – only warming up with the hotaches somewhere around Howshaw Tor. And that's another start tent that's fallen victim to the glorious weather we have for Dark Peak races.

John Gunnee won the handicap by four and a half minutes over Willy. John was a late entry and so, in theory he had a harder handicap than he might have done! But in reality, he had a brilliant run. All that secret road training has obviously paid off! Willy's run was really good as well. He was the only one of the front or mid-field to make an impact on the handicap result. The next best placed from the front half of the field was Rob Moore in 13th. Because of the way the handicap works, the winning time being less than the estimate was always going to favour the early starters. So next year's handicapper is going to have to really upset Willy with the start times.

Jane Crowson put in a great run to stay ahead of those starting just behind her and drag more than a few of them to good finished.

My vindictiveness over former winners must be slipping, Jim Paxman snuck back into the top ten, with a very good run. All that work to try and get on terms with the very capable sprint of his daughter Rose must be paying off.

In the other race, Tom Brunt managed to come in a fist full of seconds ahead of Dave Lund.

Nicky was comfortably ahead of Kirsty in the women's race. I'd split up Kirsty and Helen in the handicap, to prevent Kirsty following Helen on all those good fast lines she so loves. In the event, Kirsty pipped Helen by a very few seconds.

Map of the course

This may work for you (or not!) but if it does this is the link to Stava "flybys", anyone who has uploaded a track to Strave can watch the race unfold... http://labs.strava.com/flyby/viewer/#441574379?c=gcqzbgw3&z=E&t=1MMP9M&a=6-NRGo3wRxpYZUga9oVGGjPoRRpjqUUaMEVGGpciRhqgwkUaSR9FGg