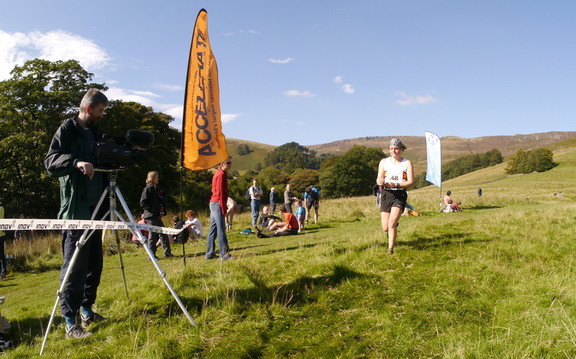 The early 10.00am start for the old, injured, slow and infirm was populated by a lot of younger spritely runners and some hoping to miss the worst of the weather, meaning those that actually qualified for this early start namely, me and John Gunnee, soon got left behind on the first climb. Not long after that everybody was soon in the clag. The later whippett like runners started passing us on the ascent to Seal Stones.

John and myself kept meeting up with each other at various deviations in the fog assuming we were both way behind. On reaching the southern Kinder track we saw in the distant clag a sole runner (he must have been in the race as no sane person would be out on such a day), and we nearly started following him to Moz's Knoll until I checked the bearing and realised he was 90 deg out. So as we reached the knoll we saw a couple leaving to the Crowden valley our spirits lifted.

Up to this point I was beginning to think of excuses to go round to Edale rather than over via the ponds but the sight of runners in front and then more behind as we climbed the last ascent to the ponds spurred me on.

On arriving safely at the Nags Head and aware that several more runners were still out, I was pleased to learn that I was not last, but several of the early starters had still not returned.

Expecting to have to perform some complicated algorithm to maintain the Dark Peak mantra that "It's a poor man that can't win his own race" was not necessary as I was the first Vet 65! (and only one).

On reaching the safety and warmth of the inside of the pub I began to hear of some more escapades experienced by other competitors, many of which have appeared on facebook. But the ones that stand out are Michael Bourne's soujourne to Sandy Heys Trig with three others and the belated return of Eoin and Fi, who earlier on had been with us at the Druid Stone and descent to Blackden.

Once everybody had returned safely, Karen bought out a surprise Guiness Chocolate Birthday Cake with Baileys cream icing and burning candles. After a chorus of 'Happy Birthday', everybody got stuck in for a slice and finished their excellent beers.

Once again, many thanks to all who turned up and either ran or walked on such a horrible day to make it a memorable one for me.