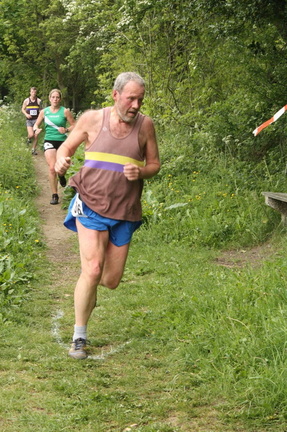 The night was cold and breezy but fortunately the rain, hail and snow stayed away. A 7.00p.m. this early in the year and bearing in mind this is one of the toughest and longest races meant that the later runners were almost finishing in the dark. 20 runners started the race and almost immediately the field fell into 3 groups - a large front pack; 4 of us in the middle and then the remainder. This race has so many options it is impossible to know which way is best? Groups parted and then re-joined and positions hardly changed.

As expected with such a tough race and bracken stalks that were like lances results were well spread and everyone lost blood somewhere - no pain no gain? All were in pain, yet I suspect many did not gain a bonus and Dave Lund is human after-all!

So from my least favourite to my most favourite - next race is a Simon Dixon classic - "Way out West" and rumour has it that it is one of the 40@40 series which means loads of new "whippets" and once again "No Bonus"!