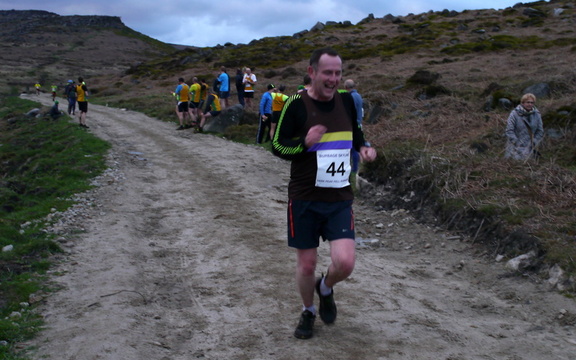 Burbage Skyline on Tuesday 3rd May 2016

Burbage remains as popular as ever, with 342 competitors this year (288 last year, 327 the year before that). Thanks to everyone who helped out – and that is a lot of you. With our regular results coordinator John Dalton having a well-earned break from proceedings it seemed like a good opportunity to try some new technology and so for the first time we had electronic timing, courtesy of RaceTek. The system did require however an extra stage in the registration process which slowed matters down somewhat, hence the decision to delay the start by 10 minutes.

The race itself was once again dominated by ShUOC in both the mens and womens races. It was good though to see a wide range of runners, including a large contingent of Smiley Paces, who I know were well briefed on the demands of the course. Fortunately, although it was boggy, the weather was favourable and there were just 4 retirements, although one chap did require first aid assistance from Edale Mountain Rescue, and we are extremely grateful to Matt Hood and his team for once again supporting the race.

So whilst there were no major injuries, a full head count and (eventually) a full set of results, there were a few learning points: We need more hands on deck and more laptops at registration for a start (and runners need to be encouraged somehow to write more clearly on the entry forms); we should flag exactly where the start line is so that we don't need to shunt 300+ runners 50 yards back down the track (thanks for your help with that one Mr Winterburn!); an extra marshal or two would be good early on where the route snakes between numerous trods; and finally, to ensure a fool-proof headcount at the end, we either need to take people's numbers from them or invest in partially rip-off-able numbers. Any more feedback, however minor, is very gratefully received.

One other thing to mention is that, for better or for worse, the men's trophy was dropped and split into three and probably needs to be replaced. I'm not sure this is such a bad thing (it's an Easter-island type figurine, complete with a large dark peak-knitted willy-warmer). I have no idea where this came from or whether it has great provenance or sentimental value – anyone?

Thanks again to all the brilliant volunteers (and apologies if I've missed anyone): Car Park / Bouncers Ralph and Dave; Registration team Les, Pete, Ian, Adrian, Stephanie and the Paxman family; Marshals Simon (also co-Sweep), Mick, Martin, Mikk (also very kindly helping with the forms), Fiona, Rich B, Tim, George, Ben, Andy, Will, Phil, Kris, Ian, Pete – and Sweep Sally. Thanks to the finish line team Richard, Tim, Bob and Tom – plus the marshals who doubled up (esp Fiona and Rich). Thanks also to Dave S, Dominic and Tony for being reserve volunteers and those who offered extra help on the day. Many thanks also to Stephen Middleton of RaceTek for taking the time out of A&E to travel up and run the technology, despite extremely difficult (WiFi) circumstances – and also to John and Willy for getting the results onto the website. And of course thanks Roy Gibson for all the help and reminding me to bring the entry forms.

As always thanks too to the Jacqui and the Fox House team for giving us the space and opportunity to muddy the carpets; Seven Hills Bakery for the prizes; Front Runner for the race numbers; Edale Mountain Rescue; team and also to Katherine and Danny at Eastern Moors for the permissions and cattle updates!