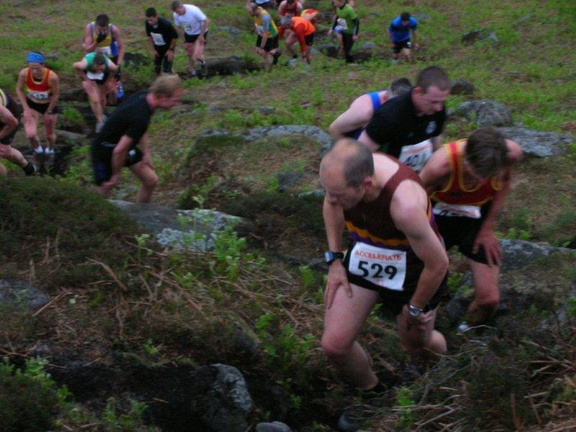 Good to see so many of you out, despite the foul weather. I was wearing a huge duvet jacket and three hats while sitting in the van waiting for the last runners, and still felt cold. Was this really late May? With this being a 40@40, I thought it best to have an out-and-out race with plenty of scope to stride out, but also some challenging micro-navigation, and a reasonable amount of route choice. You nearly all opted to go counter-clockwise, in the order that the controls were listed on the map. This gave you a flying start down to the little crags and the valley bottom, but then some tough terrain and fiddly navigation towards the end when tired. Did our winner make a good call by opting to go clockwise? That probably made control 7 even more of a t**t to find, but allowed easier navigation towards the end. I hope you all enjoyed the route despite those challenging controls. Some debate afterwards about whether control one was in the right hole. Yes, there were some other dips and scratches in that area, but this was a very prominent depression, and I located it with a compass line and a back bearing from two separate points – it was bang on the intersection. I confess it took me three attempts to find control 7 when laying out the course, and I opted for the nearest thing I could find to a wet pit. Was it the right one? Who knows, but nobody located any viable alternative on the night. Well done to Neil for winning in such an impressive time, and thanks to you all for turning up. Hope to see you next time.

A note about the league scores: as Dave was not able to run in his own race (claiming that knowing where the controls where would be advantageous), we have given him 14 points to add to his other scores (generated by some secret algorithm known only to a select few).