DPFR Juniors
@DpfrJ
A favourite destination of many a Dark Peaker and the junior races through the village have been the scenes of nume…
7d • 21/10/2020 • 8:13 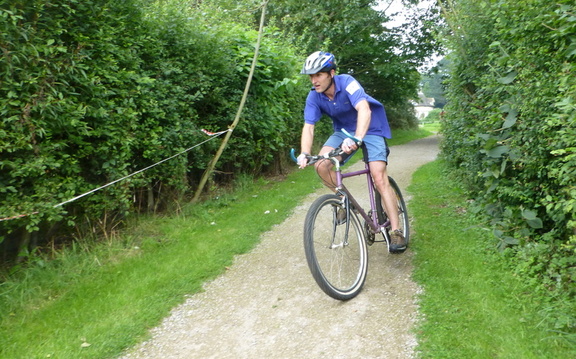 The defending champion Neil chose to have a jog, resting up for Borrowdale, leaving the gold medal [bottle of Cumberland ale] up for grabs.

A determined Tim Tett led at CP3, followed 50 metres back by young Tim Rutter, the climb up to Bob's rock is very tricky as it doesn't come into view until late on, this enabled the younger lad to steal a march and although the gap closed by the famous Holly tree young Tim held on for a famous victory, beating the record set in 2012 by over 3 minutes.

Tim T took 6 minutes off his previous time. Excellent run by Kirsty who was 11 minutes inside the ladies record on what was a cool and windy night far better than the hot steamy night 4 years ago. All exhausted runners were glad to reach the finishing gate after the gruelling last climb and some like John even said it was his favourite race, upon which the organiser pounced on to declare the race far too good to leave for another 4 years, expect a return sooner than later.

Follow the flag for seven trips to Dean Hill

Olympic year again, so Andy H organised the Blackden Beast and, to enhance its status further, it was also included as one of the 40@40 events. Further enticement to take part in the race was the repeat appearance of a Dark Peak flag made by my wife of brown and purple felt squares with a yellow zig zag across them. There was also the possibility of Nicky's much taller Dark Peak flag gracing the start and finish of the race.

For the race, the felt flag had to be returned to its 2012 position at the top of Dean Hill. First though, the flag had to be found. It was retrieved from our car port, brushed down ready for its latest appearance. An expeditionary reconnaissance force of Andy and myself, flag in hand, set off from the Blackden car park on the Saturday before the race. First stop, of course, was Dean Hill which was a little windy but not serious enough to abandon our planting of the flag on the immediate top. Such was our confidence in our positioning that we left it and headed for checkpoint number 3 (wall) and on to CP 4 (Bob's Rock). Druid's Stone, not on the course, was next and then over to Madwoman's Stones, or were they? No, we were at a more westerly set of stones as confirmed subsequently on a more detailed look at the map. But was the flag still standing? It looked fine as we returned back over Dean Hill, so our minds were set at rest that it would still be there for the Wednesday Beast.

The following Monday evening on the way to Nicky's Summer Series from the gas station, Mark, Clive and Tom mentioned that there had been some Facebook chatter hinting that the flag had been found in the Blackden car park. On the Tuesday morning, therefore, I decided to take a look and to see if the rumour was true. So, a leisurely stroll back up Dean Hill confirmed its absence. Not having a Facebook account, I decided to contact John D assuming he had one. He didn't so he contacted Penny C who did have one and she forwarded the thread which involved Lewis A, Rob C and Willy K. Through this fine piece of detective work, it was realised that Lewis currently had the flag which was returned to me that evening. By Wednesday morning when I was returning the flag to Dean Hill, I had started to count the number of visits there. This fourth visit was much windier and the one cane holding the flag seemed flimsy but fortune smiled as the original cane was lying nearby in the grass so it could be used for extra support. Even this did not seem enough and the position was changed to a slightly more sheltered hollow just below the summit. It was left there for the race.

Later that day, race organiser Andy H, fresh from his op, set us off from the lower slope of Dean Hill with the news that the flag had been placed near the top but that the wind may have blown it away; it was, by now, very windy! My fifth climb to the top was uneventful and slow but gratifying to see in the distance, the route marked out for me by figures climbing up the left hand of two grooves in the hillside, towards Madwoman's Stones. It struck me, as we descended to the wall at check point 3, that the zig zags on the flag could represent the nature of this course! Andy was at the wall encouraging us all on to Bob's Rock. Few people were in sight now though Penny had dashed in front using a superior line to the Rock. After a descent into Blackden, some bracken wrestling was necessary to escape from the valley for some relatively good running to the glories of Dunge Clough (CP 5). A brief comparison of our different routes there followed as Penny and I climbed out of the Clough and then over and down to the holly tree (CP 6). My sixth ascent of Dean Hill provided me with the short lived pleasure of seeing Eoin just behind. This lead spurred Eoin to storm past on the climb to the stile at the finish. The winner's time was fast, just over the hour; will the hour be broken in 2020? Kirsty was first lady with Fi and Penny next, though whether this race is good preparation for Fi's and David L's imminent Borrowdale race is open to discussion!

The flag was seen during the race and, of course, it had to be retrieved for the next Olympic year Beast race. This called for my seventh visit on the Thursday morning when the windy weather had the added ingredient of heavy rain. However, the flag had to be collected so a good soaking, a beautiful rainbow and the excitement of twice negotiating a herd of cows sheltering on the bridge over the river, made it all worthwhile. After its meanderings, the flag is now safely back gathering dust in the car port!!