DPFR Juniors
@DpfrJ
We are pleased to hear you have returned to competative running and most delighted to read your most engaging prose…
15d • 9/05/2022 • 9:30 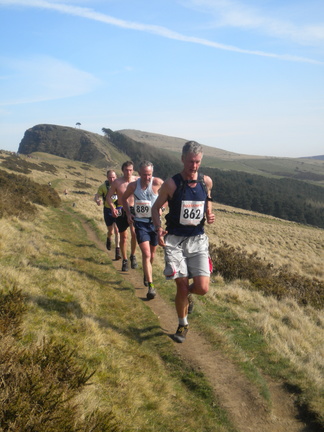 Unfortunately, the sun peaked early on Longshaw Pastures (Thursday was glorious) and it was overcast to raining on Saturday for the race.

The weather seemed to affect the sheep who were slow in their event which delayed the start of the race. Thanks all runners and helpers who understood the problem – it has been sorted so it will not happen again.

We had 176 entries and 175 starters as one person decided the course was too tough for him, thanks to Pete and Les he did not get a refund!

Everyone seemed to enjoy the race, families and friends enjoyed the Sheepdog Trials, the food, the bun stall and the Longshaw Bar.

I can't mention all of the volunteers who helped on the day (Registration / Marshals / Course flaggers / Road Crossings / Results / Spotters / other stuff), but special thanks are due to Hilary for organising me and John for the results.

Since 2003 the race has grown in number and popularity. Looking at the list there are the usual local clubs represented, but there are a fair few who travel further to enjoy this race. The farthest travelled runner this year was Ben Leese of North Brooklyn Runners who trains in Central Park, New York

I am prompted to write this up today as I have received the "Reminder and Check - 2017 FRA Race Registration" to put Saturday 9th September 2017 on the FRA Website and into the calendar which I am doing.

ADVANCE NOTICE After ten years, 2017 will be my final event as Race Organiser. The ten years have been absolutely brilliant, Hilary and me have had some great fun doing it, but we are making next year our last event.

The number of runners must enjoy the race or they wouldn't return, bringing others with them. Over 13 years, a well planned and executed system for staging the event has evolved which we would be really pleased to hand over to a new Race Organiser(s). If you want to take over an existing race, have a chat with me anytime, phone me at work 0114 2302144 or e-mail email and we will be delighted to have someone shadow us in 2017 to take the race forward.

The alternative is next year will be the final Longshaw Sheepdog Trials Fell Race.