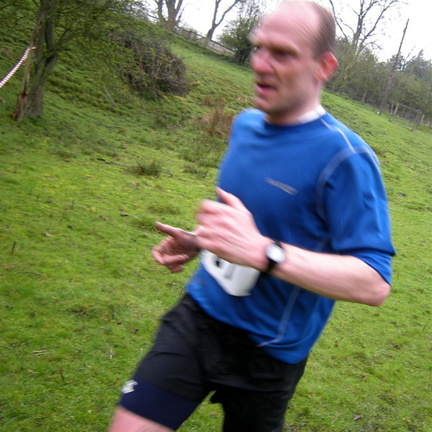 Executive summary: Matthew 20:16 'The first shall be last and the last shall be first'.

The first decent rain for ages fell the night before the race, making parking a bit tricky. I'd guess that more than a few car washes received visits from Dark Peakers on Sunday! Although the rain had abated, to my glee the clag remained, leading to some text book examples of how not to navigate. More than a few folk failed to reach Paul and Tracey at the first checkpoint, but they were compensated by Ruth, who liked the cairn so much that she visited twice. After a false start, Kris found his way to the gate at the end of the Roych Clough track. Finding no marshal at this 'Unmanned' waypoint, in vain he carried on some way towards Hayfield searching for someone to tick-off his name on a clip board. Rose, Matt and Martin at the fence corner were visited from all points of the compass, despite the presence of the two converging fences to act as hand rails. Mick and Tony at the stile near Brown Knoll had the most exposed spot, but thankfully not too windy and I think most folk found them without trouble (unless you know different?!). Not to be outdone by the runners, the Roych Tor marshals exhibited some text book not-navigation by siting themselves below the wrong end of the tor and then petitioning the race organiser to disqualify all those who failed to find them! Alan has previous in this regard, but George and Tim really should have known better. I guess it wasn't entirely their fault, as I'd had to call on John D's cartographic services very late on to produce a decent map.

Ann, Tony and Lynn, the finish team at Highfield Farm, were treated to the exciting spectacle of seeing the club's top three runners emerge from the mist together. Jim P was in the lead, but was overhauled by Josh and then Neil on the slithery plummet to the finish. Well done to Josh for adding his name to the list of luminaries on the Handicap trophy and well done to Neil for starting last and overtaking the entire field bar Josh to record the fastest time – a mere three minutes over the winning time estimate. The runners then came thick and fast (some faster and some thicker), confirming what a good job Lewis had made of the handicapping. Fairly quickly we were waiting for the stragglers. News came via a reliable source that two of them had pooled their navigational skills, but when I realised that it was Jim F and Dave A, I didn't hold my breath for an early resolution! They eventually appeared from roughly the right direction, but with Jim F still having managed to avoid three of the six checkpoints. That left Roger, who finally rolled in shortly after 2pm, having certainly got his money's worth!

Thanks to the Cooper family for allowing us access and thanks to all the marshals for their support. I knew it had been a success from the greeting I received from Tim H as he came through the final gate: Bastard.