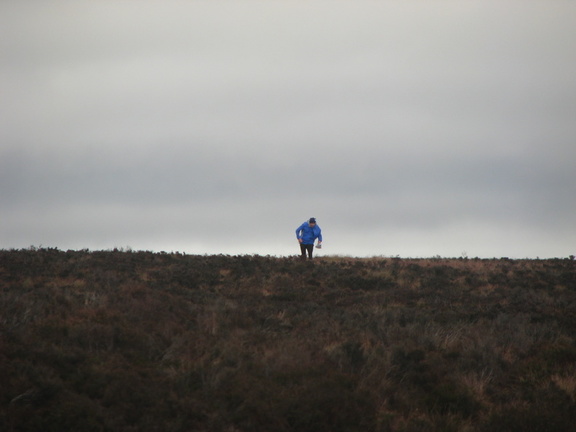 North Grain There and Back on Saturday 19th November 2016

The Met Office Bleaklow mountain forecast was for continuous snow from Friday evening to the Saturday morning of my birthday race on the 19th of November. To add to this weather excitement, fog and mist were expected to follow! All of this was after significant downpours which had ensured the planned route was well enough watered to swell the Westend and Alport rivers. Following an interchange of a few e-mails on Friday about safety concerns, an alternative bad weather route via the Westend bridge to Alport trig and back, was planned for possible use on Saturday.

In fact, Saturday dawned sunny and cold in Sheffield so the original route to Upper North Grain Hut may have been possible but as the higher hills were seen well covered with snow on the way to the race, thoughts arose of the bad weather option. An inspection of the Westend river as it emerged into the reservoir, showed no cause for alarm but……the snow depth?? Using a bit of discretion, I decided to use the alternative route.

There were eleven starters and four (!) start times with Richard setting off almost an hour after the first four of Andy, Roy, Simon and me who left at 9.00 am. The others started at 9.15 and 9.30. It soon became apparent that the snow was indeed significant as we slipped and slid whilst climbing out of Linch Clough and the descent to the bridge was nicely tricky with the mixture of snow, trees and their roots. From the bridge, there were possible choices though our group of four chose the right hand side of Black Clough, initially using the track and leaving it at the gate. The snow was deeper still with some drifting (not too much) so the climb across the streams leading to the Clough was slow (for me anyway). I was encouraged by Andy, Roy and Simon who were now flying through the snow on their return down from the trig. At this point Roy appreciated the use of the alternative choice for the race.

The trig (which Jim claimed was in the wrong place, hence his retirement) was in bright sunshine which also lit the edge of Kinder. Yes, I did look at the view so that's my excuse today, feeble, I know! My descent from the trig was a combination of falling and sliding on most parts of my anatomy. There were some fine bottom slide tracks to follow into the upper reaches of Black Clough. Approaching the woods before the Westend bridge (scene of Eoin's retirement from a sprained ankle), Stewart and Ian came sauntering by and we climbed out of the river together. Later Tim and David scampered by as they disappeared over the brow of the hillside. After this busy episode there was a quiet period, for reflection perhaps (?) before reaching the finish. Richard also had a "reflective" time, seeing no one, enabling him to finish with the fastest time in an hour and a half.

In retrospect, it may have been possible to use the original course but I think that the snow would have slowed things down just a bit too much for the slower runners so the alternative was probably the right choice. Well done to everybody. After all, there were seven first positions and two second positions out of the nine finishers. Thanks for joining me in an (early) birthday celebration!