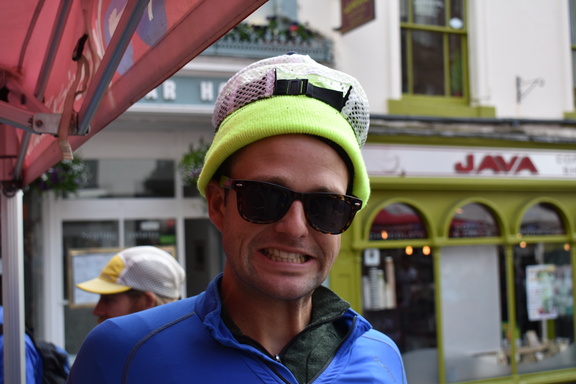 On a nostalgic visit to DPFR website we came across the idea of resurrecting the Headstone Headache as part of the 40at40 season. The third running of the race in 1982 was our introduction to Dark Peak and Peter went on his first club run from the 'Sportsman' a couple of weeks later. We ran all the remaining races until permission was withdrawn after 1987 and Trish was undefeated in the F40 category so we were keen to see the race rerun and volunteered help.

Visions of the 150-200 starters in the past made the prospect of monitoring the finishers a bit daunting. We expected a sea of unfamiliar faces but with a field of 15, five of whom we already knew, recording finishers and times was not a problem.

In the 1980's a fast line between the top path at the top of the wood behind the 'Three Merry Lads' and Fox Holes Lodge was the key to a fast time. Over the last twenty years the woodland has become really dense and there is no trace of our original 'fast line'. The alternative designated footpath shown on the OS map still looks like a reasonable replacement but it is further, steeper and not friendly to older runners knees and ankles so we were interested to see what route choices would be made. Apparently many did chose this path but it was clearly a lot slower. Tim Tett found a descent line further along though he opted for the footpath for the return.

The original race attracted some star runners: Jack Maitland (now the Brownlee brothers coach), Malcolm Patterson (now the Hill and Mountain Coach for Scottish Athletics), Liz Dunn and Clare Crofts (female winner in 1987 who went on to be British and English Fell Running Champion the year after her 1987 victory). Against this sort of competition we can't find a record of Tim Tett winning but we believe his time of 28'7" in 1984 is the second fastest ever recorded over the long course (round the goalposts).

Even though it wasn't really necessary with a small field the goal post start was retained and by the time the runners turned onto the road Tim was already showing serious intent but his winning margin of more than five minutes was unexpected. There were clearly some unfortunate route choices and maybe even a little getting lost. Of the rest of the field, only Jim Paxman bettered Trisha's F40 record so we are sure even the stars of the past would have been much slower presented with the current alternatives.

Many thanks to everyone who turned out to support the race and especially to daughter Maggie for helping with the time-keeping.