Dark Peak Fell Runners
@dpfellrunners
RT @DpfrJ: Some happy Dark Peak Juniors having a break out there on the hill. Things are working well with the new, more regular term time…
2d • 16/05/2021 • 16:55

Helen Elmore
@GalaRunner
@amblesideac I was completely unbothered by #fkt used it interchangeably on one my @dpfellrunners tweets, it gets…
2d • 16/05/2021 • 15:18 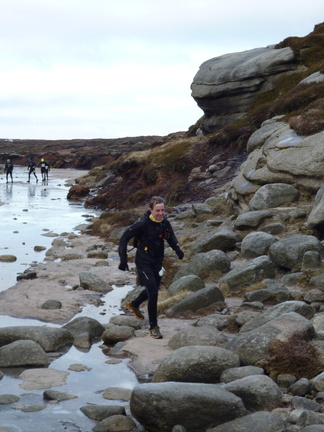 An excellent turnout of 32 runners completed the rather damp course in increasingly good weather finishing in wonderful evening sunshine. Owing to the unbeknown closure of Moscar Moors, a last minute change was necessary to substitute Ox Stones for the Head Stone to enable the race to continue. However this major route alteration proved to be popular as it omitted the original 'rough bit' from Burbage to White Stones, and included more route choice between White Stones and Stanage Pole. In keeping with the 'stones' theme the race was started by Bob Dylan singing ''Let's all get stoned'' from his 'Rainy Day Women' song. This seemed a novel way to start and I would like to encourage other Dark Peak races to start with appropriate music. I may even contact the FRA to promote this idea in its championship races.

The race was fast, furious and wet under foot. Surprisingly none took the best route around Brown Edge Quarries, obviously not having done the Wart's Revenge. Varying lines were taken from White Stone to Stanage Pole, with everyone declaring theirs was the best.

Tradition has it that only those attending the prize giving can receive trophies, so Helen Elmore lifted the Cowper Stone Trophy and Nicola Parkin Cowper Stone 2. Numerous White Stone Trophies were eagerly fought for with most being retained by last year's winners. A few extra trophies were awarded this year, at my discretion, for the 'distinguished and mature' category.

Many thanks to everyone who returned last year's trophies so efficiently. Could this year's winners keep them safely in trophy cabinets until next year? Please ensure they are included in your house insurance. I'd be interested to know if people preferred this route to the previous years.