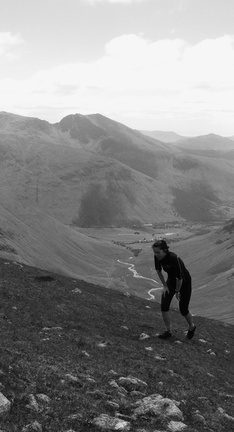 This year's race had been postponed from early May to 1 August following heightened concerns with regard to the potential disturbance of nesting birds on certain parts of the course. As far as I am aware this is the first time that the race has been run at the height of summer, and this made a significant impact on the race experience because of the sheer amount of vegetation. The paths and trods that form, in particular, the early sections of the route were very difficult to see. Having reccyed the route the day before I managed to get a few flags in place so that marshals would be stationed at the gates to the best lines – although this still didn't prevent eventual race winner Josh Williams and a number of followers from taking a dodgy line at the first bend!

There was also the rain, which had been torrential during the day, and with memories of this year's Trigger race still fairly fresh, a last minute route change was on the cards at one point. A quick pre-race reccy, accompanied by new Dark Peaker Leroy Marshall, confirmed to my immense relief that the river was still easily crossable – although I'm glad we had some extra marshal assistance at the crossing points.

By the time of the race the weather was actually very good – cool, sunny intervals and just a light wind; but of course the ground was still extra boggy, and a strict no-road shoes policy was applied – and was gracefully accepted by the three gentlemen who were caught out by this (one who was let back in following James Halse's generous offer of a temporary shoe swap).

Given the rain in the day and the mid-summer timing the numbers were down on normal – just 216 rather than the usual 350 or so. This made the registration process quicker though and the race got off on time – although many people still get confused about the location of the start. We usually have a few retirements but there were none this year, and no significant injuries, despite the slippiness of the route and, in particular, the amount of hidden stones and roots under the bracken.

As mentioned Josh won the men's race for Dark Peak in a very respectable 41:49 – he was disappointed though that his employer Amey (yes, that's the Sheffield tree felling business, but Josh has nothing to do with that side) has a strict no booze in the bloodstream policy meaning that he couldn't have a celebratory pint. Caroline Brook won the ladies race and both winners received new trophies based on Richard Hakes' brilliant photo from last year. (The previous men's trophy with the willy was dropped last year, was broken and is no longer with us.) I was pleased also to give out U23 prizes for the first time – congratulations to Alex Hinchliffe of Vegan Runners. I don't think there were any female U23s?

Speaking of results our sincere apologies go to those people who should have got prizes but didn't, because our technology failed us. This has something to do with a difficulty getting the signal from the finish line back to the computers at the Fox House. The results on this results page are correct, and are the results that will be submitted to the FRA.

Burbage is a real team effort and my thanks go out to all of the Dark Peakers and others that helped out:

Racetek: Stephen Middleton – helped on the day by Ian Gibbs

Prizes: Seven Hills Bakery – and Richard Hakes for the photo

Fox House: Rebecca and all the team

Eastern Moors Partnership: Danny Udall (thanks for popping by on the night!) and Katherine Clarke– and thanks to Bob Berzins too for help with the access side of things

Apologies if I've missed anyone out?

That's all for now – back in 2018, possibly in May again with a revised bird-friendly route TBC