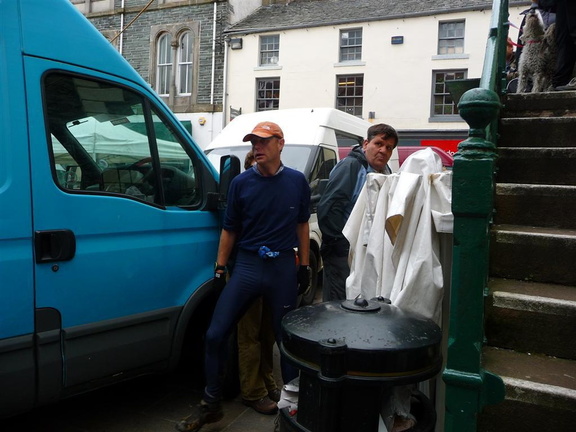 The feedback seems to have been very positive about this year's Club Champs route. As previously said we had to make compromises with the route to keep within the permissions we had secured but it was still very challenging – lots of fast running combined with some rougher terrain for the first 2 controls, and some potential for losing significant time in Bretton Clough when tired, followed by a long slog back up to the trig point on Sir William Hill.

Sixty-three started and two had unfortunately dropped out before control 2 at Stoke Ford, victims of sprained ankles whilst descending the rough terrain into the valley. Our radio control (3) told us that all runners were through it except for one, a certain Mr Kev Saville who had missed a 90o turn on to a footpath and carried on to control 5 before realising his navigation error and returning to control 4. By control 7 David Arundale's handicapping looked like it was going to pay off – he was 10 minutes ahead of the next runner. However, Peter Davies had other ideas and turned a 60 minute time deficit on David into a 3 minute advantage at the finish ahead of second placed Tim Ray. Martha Hart had a similar time advantage over the next runner to take the ladies handicap. In the end, we had 60 finishers and all were back shortly before the weather took a turn for the worse and started raining. Neil Northrop and Jude Jepson took overall honours; Josh Williams and Jude were the King and Queen of the mountain. Post-race drinks, sandwiches and chips were enjoyed by all in the Sir William Hotel in Grindleford.

The race could not have taken place without the necessary permissions from all the landowners - Rich deserves a big big thank you for sorting this all out. Finally, a big thank you to all the marshalls for your help on the day.