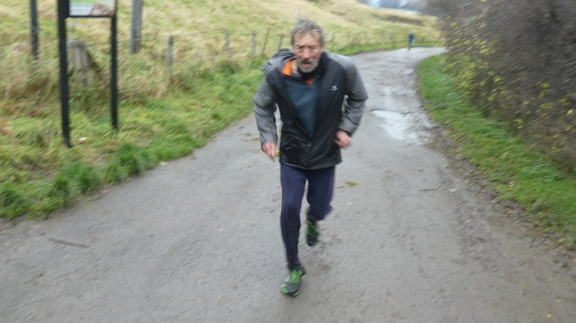 A rather elderly male only field completed the race with Jack Foxall being the young fresh blood at 40 and Mick Cochrane the Peter Pan at 71. New comers to the race, such as Mike Nolan were disappointed to find their plans to use the road to Houndkirk Hill were instantly squashed. However, he still avoided getting his shoes dirty over Ox Stones by running around Jumble Lane. An application form for Steel City striders is in the post for him. On the starting line, Phil Crowson, a very safety conscious runner, made the point that he was the only one in possession of a map, even though it appeared to be for Thailand.

Winning times were 5 minutes faster than last year, with Mike Nolan just 9 seconds in front of Bob Johnson who was also second last year by 7 seconds! Certain individual sprints to the finish were spectacularly close with Andy Barnett piping Phil Crowson by 1 second to win the O55 trophy. Dave Holmes’ elbowing techniques paid off again as he successfully defended his O60’s trophy. Every one finished in well under hours with Paul Sanderson a most respectable 1hr 53 mins.

The race began to the accompaniment of music which continued the innovation introduced in The Dark Peak Stones race which started with Bob Dylan. In order to elevate the artistic appreciation of Dark Peak, this race commenced with Tchaikovsky’s Nut Cracker Suite which the less cultured recognised as Cadbury’s ‘Fruit and Nut Case’. Whilst listening to the music, several interesting ballet versions of the Sugar Plum Fairy were noticed.

Trophies this year were extremely valuable owing to the scarcity of coconuts throughout Europe which are selling at £1,500 per ton! Trophy holders are therefore advised to increase their contents insurance to allow for this. With no female contestants, there were more trophies for male categories which were awarded as follows:-