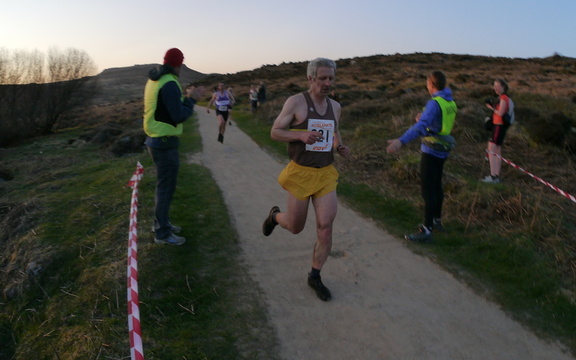 The weather threatened to stop the race happening, with doom laden forecasts of heavy snow. In the event, the snow was only coming down in intermittent, but heavy showers. So getting to the start was fine.

The strong wind made for foul running on easterly legs. Goggles were a worthwhile luxury. The other piece of kit to cherish were orienteering "dobs". The slabs and some rock had a lethal sheen of verglas. Slippery ice was less of a problem in the Kinder river… as you broke through most of the time!

Glen picked some good lines and was ahead of the pack of fast men, but Tom wound him in after the south bound long crossing and finished the job on the descent to the finish. Good running, given his running of the Edale Skyline last week.

Inevitably, given limited visibility and a small field, there were some walkabouts. We await the explanations….in all their glory!