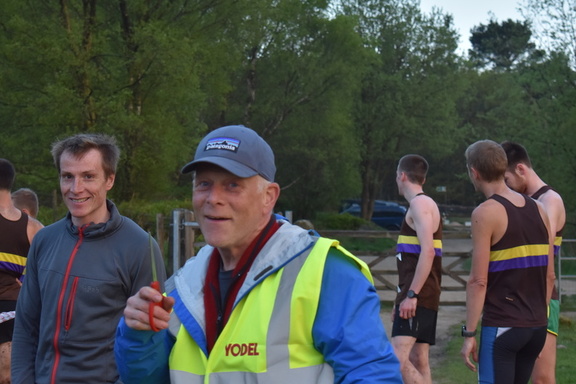 A good turn out with 17 heading out on Kinder in 3 separate starts.Early arrivals ensured there was plenty of banter before the off.The 9am start was the most competitive with 10 starters.Little battles happened throughout right up until the final decent. Upon setting everyone off I declared that there would be no drafting and that no one could run with 50 yards of Kirsty.Jack and John headed off at 9.15, followed by Neil, Simon, James, Tom and I at 9.30.On the drive out the clag was down and so smiles all round when it lifted and left a clear Kinder for us to enjoy.Many folk fancied walkabouts however, especially on the long crossing back from the spring below Noe Stool.John even deciding to head back to Ringing Rodger before getting back into race mode and completing the course.Lewis almost followed, or lead, as the case maybe but quickly realised that a visit to Ringing Rodger could be left for another day and got himself back on track with limited time wasted.

I think however the prize for the best (or worst) wanderings must to go Rob Moore, who did not declare this until loading up his Strava track upon returning home (don’t you just love Strava!).His lines look great until Kinder Low when he proceeds to turn right and loop back onto the Hayfield side, pausing for some time, before running back long the lower track and under (?) the downfall before climbing out and heading up the Kinder river, crossing Kinder and almost tagging spring 1 for the second time before returning to Birchen Clough up the road.Hmm…Is that a dnf?I suspect this could be a contender for some sacred award that’s given later in the year? Could be? Maybe? Definitely!David Hakes and Lund however did put in a great performance wandering on the triple crossing so already in 2018 we have some early contenders putting their hands up.

The early start was the most competitive I’ve seen is a while. Quite varied lines were taken through to spring two, but the majority of the start group reconvened there. Did Kirsty see Andy H there chuckling, or was it some kind of bizarre delusion? After spring two, no one seemed to recall the race briefing, as a group of half a dozen or so ran at close quarters, gaining a yard here, losing a yard there. All within the declared “drafting” zone of Kirsty. Jack came hurtling down through the group just as we got to spring three, having made up his 15 minute staggered start, then hurtled on and left us as though standing still….to take a fairly rough route back north. After spring three, the group broke up. Some opted for the high line on the return crossing (how much this was influenced by Kirsty’s route choice, can not be determined). A few opted for Crowden clough (with added variants).

At the finish, the high route posse finished pretty close together. The Crowden clough adventurers were much less tightly packed. The close quarters racing made for some good hard running.