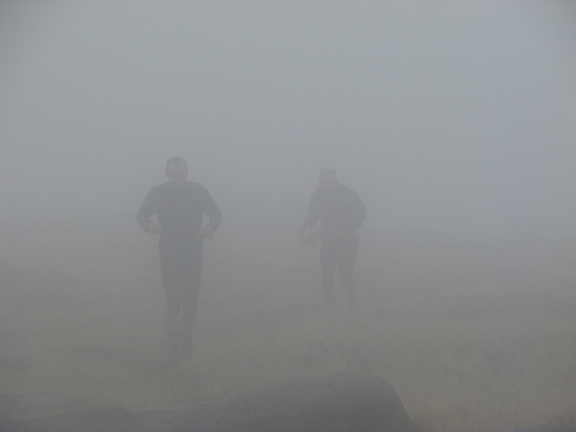 25 intrepid athletes set off on the Royal International Dungworth Fell Race into the mellow fruitfulness of the local countryside. The course was taped & a map of the route was displayed at the start but despite this several of said athletes managed to go wrong! This included the winner, Tom Saville. Other notable walk-abouts included David Hakes who admitted that he had completed the race some 15 times in his life. He was awarded the Headless Chicken award for his efforts. Maurice Musson led Barry Needle off course towards Stannington for a while but they managed to find the race finish eventually. Maurice was awarded the beautifully restored Nag’s Head Trophy by John Gunnee,the previous holder.

The much coveted Neo Fascist Brugorolas trophy was awarded to a woman for the first time in its long & exaggerated history. Jo Yeoman’s good showing in the Loxley Lunge & completion of the Dungworth sealing her fate.
The organiser would like to thank Chris Barber for his help & advice during the taping of the course & Jonathan Straker, Dave Markham, Mick Poulter & Chris again for marshalling. As ever,Richard Hakes did the finish & after that we all retired to the Royal Hotel for beer & chip butties.
All entry fees (& several other notes & coins) were donated to the Steel Valley Project who keep our footpaths tidy & the vegetation down so we can all use them.
Tim Hawley.
Find similar results Download
25 starters
Click the to see results for the athlete in all results for this event, click the name for all known results for the athlete