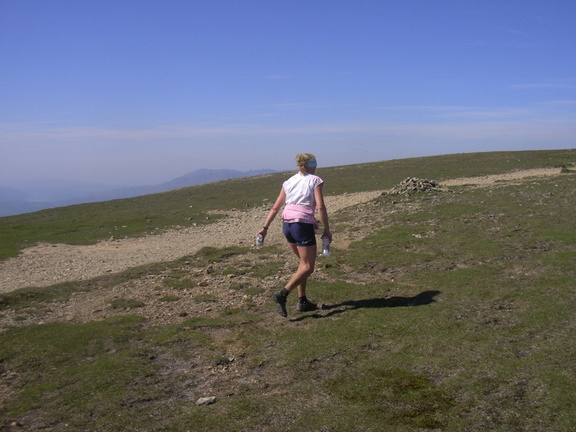 During the heat wave a most diverse range of club runners set off to the sounds of Bob Dylan getting stoned. The extremes of the club who were involved consisted of young whippets through to rather elderly greyhounds, including one with new knees. In order to comply with trendy inclusivity, there were a number of different start times before the official time of 6.45 at Burbage Bridge. The earliest being 5.00 from Fox House!

It was the second running of this particular route that included Ox Stones rather than Buck Stone, to avoid trampling on the wee birdies. It appears most people preferred this course as it provided greater route choice from White Stones across to Buck Stone and more varied terrain.

First runner home was Tom Saville in a record time 54.37 who received the Buck Stone trophy. Two minutes behind was last year’s winner Ollie Johnson, followed by Lova Checknik and Jack Foxall both finishing under 60 mins. Megan Wilson was first female in 63.40 and received the much talked about Cowper Stone trophy. Second female was Maggie Lewis who only turned up to return her offspring’s trophy but bravely decided to race and was suitably rewarded, also with a Cowper Stone trophy. Numerous other celebrities won White Stones including Dave Allen who has won so many in the past that he selects the one he wants and puts his name on it before the race. Keith Holmes once again painfully put in an admirable performance to claim the M65 category.

There was fierce competition for the coveted Rolling Stone Mick Jagger trophy awarded to the oldest runner not to win a category trophy. The winner was Roger Baumeister, productively using his bus pass he set off from Fox House on his NHS replacement knees and finished in a remarkable time of 3 hours. His rival, Jim Orrell proudly won the new Rolling Stone Keith Richards trophy which I hurriedly constructed when I realised both elderly greyhounds were running.