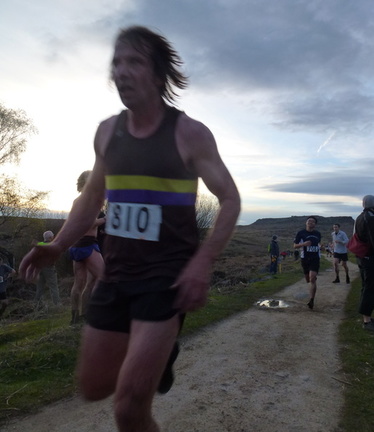 A fine day surprised us at Edale after leaving Sheffield in a pea soup fog, making ideal conditions for running the race with no wind and temperatures around 5deg C in clear visibility.

A good turnout of 24 runners and three cyclists. There were three start times to even the field out and hopefully get everybody back within about half an hour, apart from an early start by Jim Paxman who was disqualified anyway for not doing the third descent and climb after the knoll but taking the soft option round the head of the Crowden valley.

A superb run by Tom Brunt gave him a convincing victory, several minutes in front of Tom Saville closely followed by a great run by Rich Bradbury. Most times were pretty quick this year with some good grouping.

A fine run by a first timer Martha Hart, who acted as a pacemaker for Phil, who luckily didn't need any other coronary assistance.

Pete Gorvett was 1st (and only) MV70 finishing in just under 3 hours capping off a fine year. Family team of Andy and Emily Barnett also finished under 3 hours.

This was the 20th running of the race first instigated on my 50th birthday. Many thanks to all those who turned up on sunday and those who have supported the run over the last 19 years.