Dark Peak Fell Runners
@dpfellrunners
RT @edalemrt: Please do read the article below from Keswick MRT. A truly miraculous outcome and a credit to the dedication and skills of a…
4d • 23/06/2022 • 8:40

peakdistrictadventure
@peakdistrictad1
An assortment of furniture on Kinder, Hartshorn and Blackden trig the seat was rather comfortable allegedly and has…
4d • 22/06/2022 • 21:36 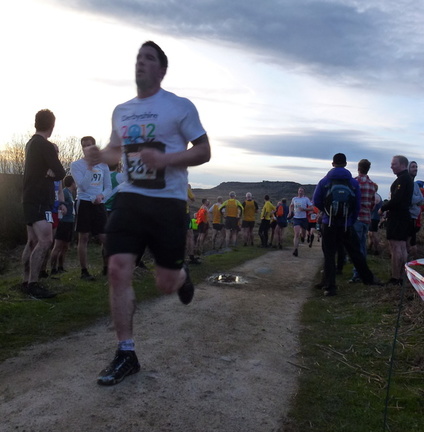 Although the I.O.C had postponed the Japanese held games until next year, the race organiser went ahead on schedule with the race.This was no time trial as several runners gathered for 2 of the early starts. Three runners broke the record, with Ralph coming home first. However as he didn't go down to the stream/wall end his time will not be recognised as the record. In fairness to Ralph there was lots of broken wall and tributeries up from the CP. Dunge Clough is rarely visited and quite knarly!

The most significant route choice is between Bob's rock and Dunge and going round the top or directly North seemed to work well, but not into the the jaws of Blackden where bracken waited to snare runners (including the R.O). James dropped off too early on the way from Madwoman and the CP3 is well out of sight from the first part of the ridge. Well done to Rosie, the only woman in a very creditable time and to Tom W who ran slightly quicker than 4 years ago.
Graham had already been up Dean hill to plant the flag, the day before, and having lost his 070 record to a speedy Pete Gorvett, he wished to claim an over 75 best time !
It is possible that when the actual Olympics are held, if they still happen, a rerun could happen .
As for the winner I am declaring that both Ralph and Nathan are joint winners with the record being held by Nathan at 60:13.
Andy
The 040/50 record remains Tim Tett 63:49, 060 record Keith Holmes 78:09 and women's vet and open Kirsty Bryan-Jones 76:30, all from the 2016 race.
Andy
§ Ralph probably would still have been fastest even with a slightly longer run, but as the RO declared him joint winner I have given him the same time as Nathan.
§§ 10 minutes added to James's time as he mistakenly started from the flag
Find similar results View track Download
16 starters
Click the to see results for the athlete in all results for this event, click the name for all known results for the athlete