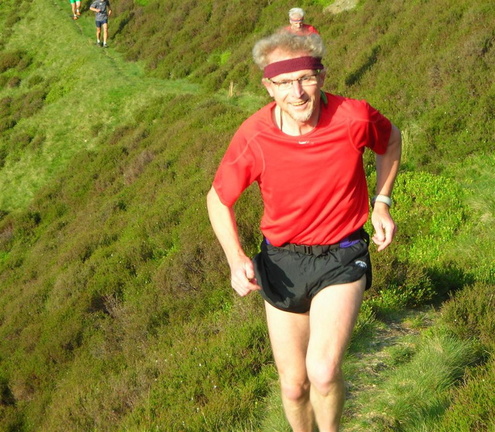 Back Tor and Beyond on Wednesday 5th May 1999

The race clashed again with the Tigers 10 and also with the Mount Famine race , so it was gratifying to have over 30 people taking part on a fine, warm evening.
I made the race a bit shorter than usual , mainly to allow myself to get in the pub earlier. I've found in the last two years that , waiting for the back markers , I've been arriving at the Strines too late to enjoy the post race atmosphere to its full. This year there was less than half an hour between first and last and I was in the bar in good time.

The race had only one checkpoint , plus Back Tor of course. This checkpoint was a beautifully secluded spot in Upper Abbey Brook where the stream takes a sharp right angled bend. After Back Tor people chose a variety of routes ; some going on the path along Cartledge flats and dropping into a gulley down to Abbey Brook , others going by Lost Lad. I had decided beforehand that I would go direct across the moor which was a pretty good route involving a breathtaking plummet to the control. However the quickest way seems to have been on the Cartledge track and then to return by the same route.. Those who chose to return by Lost Lad apparently lost a couple of minutes. Anyway the race seems to have been enjoyed by all.

The official winner was Alastair Buckley, but I awarded the Ken Slack Strines Fell Race trophy to Roger Woods because; a) Alastair wasn't there for the prize giving, b)he's won it before c) he's too young. Hillary and Mike won jars of jam for being female and last respectively.