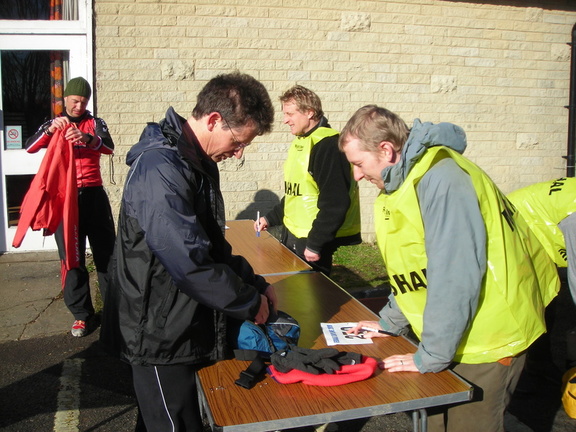 An injury (falling downstairs after a heavy night) prevented Paul Deaville from retaining the Knott FR club championship and also from claiming perpetual possession of the original Granville Harper Memorial Trophy, which he would undoubtedly have won for the third year on the trot. It was sporting of Paul to turn up with his infant son to support the event and do a bit of course clearing. Victory went to that popular old-stager Dave Tait, for whom Dungworth became the jewel in the crown of a very successful season. Lynne Bland, now happily restored to form, took the moosehead. The replica of Hiro's fan (still lost) went to Colin Henson for a neat if fairly conventional walkabout somewhere between Sanderson's Bottom and Bramall's Bend. Richard Hakes retained the reconstructed grotesque neo-fascist Brugarolas Cup for winning the Loxley Rough Running series: a separate report, including coverage of the newly instituted Loxley International Mountain Marathon, may perhaps appear in the pages of the Newsletter.

Club matters:- The Penistone stalwarts (with Willie Gibbins in attendance) did their usual bumper day-out package, running over from home to the start and then putting in some very tidy formation running in the race itself. It is not recorded whether any of them has ever consummated the bumper package by running home again from the Royal. Dungworth is the only club race and ipso facto the annual championship event for Knott FR. It was heartwarming to see the evergreen Phil Wheatcroft taking advantge of Paul D's injury (see above) to take away the garland. A birth is always an occasion for celebration, and the organizer is especially gratified that Dungworth should have witnessed the coming into being of Thornhill Footpath Runners, currently comprising Dave Moseley (Hon. Life President), Alison Shepherd and a rather bemused Stephanie Cockerhan who was press-ganged at race registration.

The course was in excellent condition, firm-to-soft all the way round, on well tonsured tracks (the velvet glove, courtesy of Bradfield Parish Council) concealing the iron fist of deep glutinous sludge, without hard shoulder, at Bramall's Bend beyond the evenly spread slurry chute in the farmyard (courtesy of Mr Bramall's cows and tractor). The new management at the Royal Hotel made us very welcome and laid on some good ale, etc. and sandwiches. The plug is worth underlining: The Royal produces magnificent pies and makes an excellent start + finish or stopping off spot for some rewarding field walking/running in the Bradfield vicinity (as was experienced the preceding weekend by those participating in the two-day LIMM).

Grateful thanks to the farmers for permission to form links between the various rights of way thus giving the course its unique bent-handled tennis racket shape. Thanks also to Squire JB and Lady Margaret Edwards for course-marking, and to Les Outwin with Louise Johnson for meticulous time-keeping. Finally, next year's running will be on the last Saturday in September, as usual, which will be the 23rd of that month.